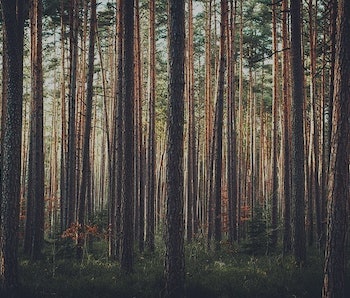 As climate change continues to turn the world into a sauna, we’re going to need a planetary-strength deodorant to cover up the scent of our sweat. Flowers have always masked the odor of the decay they grow from, but new research suggests we won’t be able to rely on them for long: rising temperatures are limiting their ability to synthesize floral scents and perhaps their chances at reproduction. Strangely, the most plausible way to prevent this from happening involves pine scent.

The researchers from the Hebrew University in Jerusalem found that flowers forced to grow under sweltering conditions don’t smell nearly as sweet. In their study on two varieties of petunias — P720 and “Blue Spark” — they discovered that increasing the ambient temperature made it much harder for the flowers to express the proteins that synthesize the scented compounds. The result? Mostly odorless flowers, with all the sex appeal of your grandmother’s plastic blooms.

Biologically speaking, flowers synthesize smells for ultimately the same reason we douse our bodies in Terre d’Hermès: sex. Pollinating insects are drawn in by the fragrance, picking up pollen from flowers’ reproductive organs and spreading them from plant to plant. But according to the Israeli study, published in Plant, Cell and Environment, global warming will lead to sadder bees and sadder bushes.

If we want a floral-scented future, we’ll have to find a way to curb the planet’s rising temperatures. Oddly enough, another team of scientists think the key to doing so might rely on scents of the evergreen variety. The scented vapors released by pine trees, according to a new study in the journal Nature, rise up into the atmosphere and reflect sunlight back into space, helping the Earth cool down.

As outlandish as it may seem, scientists are discovering that scented chemicals released by plants can actually play a role in regulating temperature. In the new study, the international team of scientists found that the compounds from the pine stands of the northern hemisphere rise into the forest canopies, where they react with oxygen to form aerosols, which allow them to rise into the atmosphere. There, they form clouds that block the sun from hitting the Earth.

The researchers hope that the scent of pine trees will stave off the effects of climate change for now, but they caution that it’s not going to save us in the long term. To survive long enough to create their scented compounds, the trees will inevitably need a steady supply of water and reasonable temperatures to grow in — neither of which are guaranteed, as global warming speeds up. A warmer planet also means more bark beetles, which present a major threat to boreal forests.

If we’re serious about mitigating climate change, we’ll have to step up our relationship with flowers and trees to a degree not unlike that predicted by M. Night Shymalan’s horror disaster The Happening. While the film itself was ridiculous, its premise — that we should fear plants, because they can straight-up summon our deaths — wasn’t that far off.