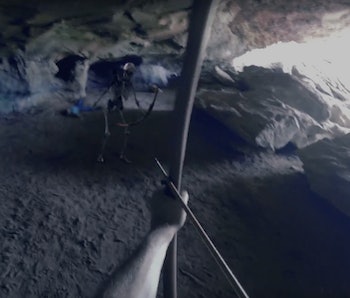 Minecraft is the best-selling PC game of all time, inspiring millions of children and adults around the world to build their dream creations in a vast virtual landscape. But have you ever wondered what Minecraft would be like in real life? On Monday evening, YouTube channel Nukazooka answered a question that has plagued gamers since Minecraft’s 2011 launch.

The answer, it seems, is that it would be really, really weird.

Nukazooka stayed true to the original game in their video depiction of a real-life Minecraft game. Familiar elements like creepers, diamonds, and community legend Herobrine all make an appearance. It turns out, unsurprisingly, that a game involving scavenging for wood while fighting off beasts is actually a pretty scary concept.

The team say that they learned their special effects skills using Video Copilot, a website that offers free tutorials on how to use software like Adobe’s After Effects. That, combined with “a lot of experimentation in the software,” led to Nukazooka being able to produce videos like the one below.

It’s not the first realistic version of a video game the team has made. Last year, Nukazooka uploaded a real-life version of Rollercoaster Tycoon, complete with ride building, crashing coasters, and guests puking up.

Minecraft has taken the world by storm, but Microsoft, which owns the rights to the intellectual property, has big plans for its future. Minecraft Education Edition is set to launch this summer, while Microsoft has demonstrated an augmented reality version of Minecraft for use on the company’s HoloLens goggles. Hopefully an augmented reality version will retain the series’ cartoon graphics, as Nukazooka has shown the game can get pretty bizarre out in the real world.