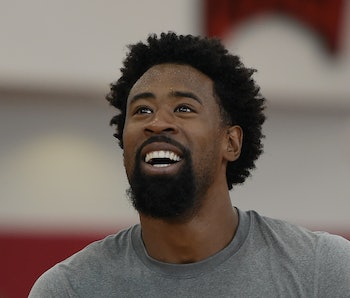 Many basketball fans know gentle giant DeAndre Jordan for his precious inability to shoot free throws while playing on the Los Angeles Clippers. But TMNT: Out Of The Shadows showed the general public he’s as good at wacky comedy as he is bad from the line.

There is one alley-oop line in particular that allows Jordan to slam home a punchline: When Mikey drops a dripping slice of pizza on to the court in the film’s opening, Jordan slips on it and proceeds to yell at a frustrated ref, “I’ve got pizza on my shoe! Pizza on my Nikes!” The moment is a bright spot in a surprisingly somber movie, and it feels, in part, like Jordan’s 10-second audition for the inevitable Space Jam reboot.

LeBron James, this generation’s Michael Jordan, is set to star in the reboot film, which Warner Bros says Justin Lin will direct. James has proved his comedic abilities several times, most notably in Amy Schumer’s vehicle movie, Trainwreck, which opened in 2015. While LeBron has a dead-eyed, dry delivery, DeAndre can match that with bombastic joy. LeBron’s funny because he frightens smaller men, and can look especially silly, as he did in Trainwreck, if depicted as a fan of typically feminine things (Downton Abbey). DeAndre, on the other hand, is funny because he’s too friendly for his stature; one can almost imagine him knocking into the cartoon characters and being tricked by both Bugs and Daffy.

From a comedic standpoint, it would be fantastic to see LeBron get fake-frustrated with DeAndre’s sunny disposition, and watching both men react to Steph Curry’s enigmatic, near Jim Carrey-level facial expressions would make Space Jam worth the trip to the theater. Granted, Steph hasn’t been confirmed for Space Jam either, but…let’s be real. The guy has been mugging all over social media with his adorable daughter and quick-witted wife for a solid year now. He’s ready.

DeAndre even performed in a table read at UCB for Funny Or Die in 2014, reading Charles Barkley’s part from the original Space Jam, and doing a damn good impression of the guy. Conclusion? He is undeniably lovable. Let the man act!

We can only hope that DeAndre’s quick dialogue in TMNT will catch Lin’s casting team’s eye. It’s the year of reboots, and our tired, overstimulated masses deserve to hear DeAndre yell ridiculous things along the lines of “pizza on my Nikes!” DeAndre would easily buddy up with Porky Pig, LeBron’s gonna be a fan of the trouble Bugs and Daffy get into, and Lola Bunny and Steph are kindred spirits. Nobody wants to contend with the Monstars. There’s the beginning of your reboot plot, Warner Bros — you’re welcome.