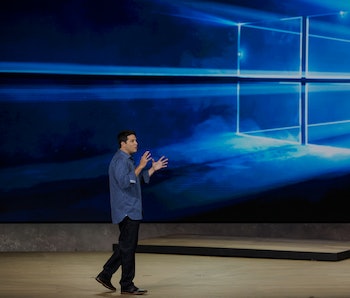 It never seems there is a convenient time to upgrade your operating system, but one Reddit user says the forced installation of Windows 10 through his company’s slow internet connection in Africa cost them a lot of money and more importantly, potential human and animal lives.

Gershon says he has been helping out with computer and IT matters from time to time ever since the organization’s plane crashed before his arrival, and he’s just trying to help out where he can.

According to his post, the team was on a mission to track and coordinate anti-poaching rangers in the field and in the middle of those efforts their computers were effectively shut down when Microsoft forced a 6 GB download of Windows 10 through the company’s slow satellite internet connection.

“Aside from the fact that we pay per MB, and already share a slow connection, if a forced upgrade happened and crashed our pc’s while in the middle of coordinating rangers under fire from armed militarized poachers.. blood could literally be on MS’s hands. I just came here recently to act as their pilot.. but have IT skills as well. The guy who set these pc’s up didn’t know how to prevent it, or set a metered connection. I am completely livid.”

Today, the team hosted a Reddit AMA to answer questions about the incident that took place in hopes to raise some funds for their conservation efforts.

He wasn’t able to say how much the background download cost the organization due to it being the weekend, but he did reveal that a Microsoft employee reached out to him in an unofficial capacity and said he escalated Gershon’s request through the company’s PR department.