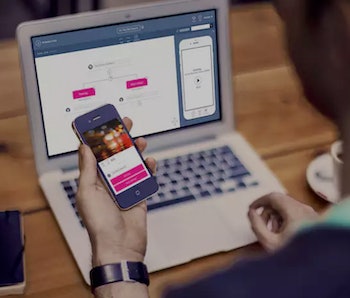 Imagine: You wake up to a text from your partner on the force. It’s a “419” at the Old Cannery building — a murder. On the ride there, your partner seems pretty jaded: someone is dead and all he can seem to complain about is a lack of breakfast and the spilled coffee in his cruiser. While the scene was grisly, it appears the victim is a high-profile city politician. But you haven’t left your bed, in fact you’re not a cop at all, and your partner is a Facebook Messenger Chatbot feeding you the latest mystery from the perspective of Detective Kees.

It’s the beginning of one of many stories told through chatbots via Sequel, a chatbot content creation system that allows authors, screenwriters, and developers to create interactive stories through a new medium. The platform has been in beta for the past year and today it makes its official launch. Sequel made its debut in April, during Facebook’s F8 developer conference, when several chatbots were introduced.

There are love stories about characters that have traveled out West, science fiction adventures that warp time, and horror scenarios that contemplate building torture chambers. It’s not too off from video games that explore storytelling through more immersive visual media where there is a lot of dialogue involved, but with these stories it’s all about the dialogue and familiar interactions through emojis, photos, and GIFs.

Each bot gives users prompts to respond so they don’t get off track from the story, and the choices can change aspects of the story down the line.

“We feel that the real opportunity for bots lies in connecting consumers to media and entertainment experiences with real personalities that have agency and style,” says Omar Siddiqui, CEO of Sequel. “Our interactive storytelling background developing top social and mobile games has given us experience in building rich worlds with memorable characters that users enjoy over many years.”

Sequel also works on Kik and Telegram and claims it will soon roll out and work seamlessly across other popular messaging platforms such as WhatsApp, WeChat, Slack, Skype, Line, and even good old SMS.

The company claims users don’t have to know code in order to create a story. Drag and drop elements allow creators to string together stories or make news chat apps and games. The teen magazine J-14 developed an entertainment trivia game on the platform.