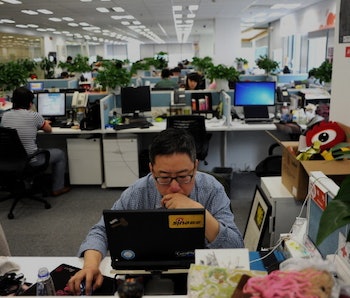 It was bound to happen: According to reports, Tumblr has now joined the ranks of Facebook and Twitter to be blocked in China.

But it’s unlikely that China’s determination that Tumblr should go dark means much at all. Tumblr might be big and getting bigger — with 15 percent growth in 2015, according to eMarketer — but Chinese users only make up 1.78 percent of the site’s global traffic as of April, according to the web traffic data firm SimilarWeb. Indonesia clocked in at just .23 percent.

The platform hasn’t even been in China for very long: Tech in Asia reported that Tumblr only began its beta testing of a translated site in 2015.

Chinese netizens have other, homegrown social platforms where they can reblog content and broadcast their thoughts. In the first quarter of 2016, the instant messaging and microblogging platform QQ reported 877 million monthly active users, more than half of Facebook’s monthly active users in the same period. (Though many used the platform to instant message their friends instead of blog.)

And the most popular microblogging platform, Sina Weibo, has around 200 million users, according to the BBC. Those sites have to watch out for illegal pornography, though, too: In April, Weibo got a warning from China’s Cyberspace Administration to clean illict content off its platform.

Tumblr has not yet responded to Inverse’s request for comment.

More like this
Innovation
9 hours ago
A wild new plane-train hybrid could whoosh you to your destination — if it can get off the ground
By Molly Glick
Innovation
8.5.2022 6:30 PM
This breakthrough stem-cell therapy could reverse genetic blindness
By Charles Q. Choi
Innovation
8.5.2022 11:00 AM
Alexa could diagnose Alzheimer’s and other brain conditions — should it?
By Joanna Thompson
Share: