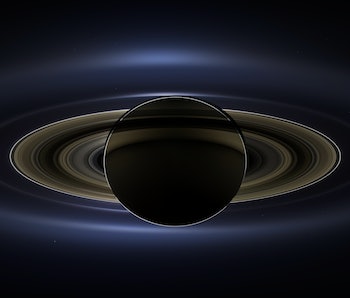 You’re probably sick of Mars by now, what with the endless news about Mars in Opposition (lots of that was us. Sorry). But hopefully you’re primed for news about Saturn in Opposition, which is also cool!

An annual event for Saturn, this means the planet will be lined up directly opposite the Sun, with the Earth in the middle, around 3 a.m. Eastern on June 3, and will be visible all night, even with a fairly small telescope, though a larger one will of course get you a better view of the individual rings, which are half the point of Saturn anyway. Its opposition to the sun means its surface appears fully illuminated to us; this is the brightest the planet will appear all year.

Summer will be the best time of year to get a good look at Saturn for most of the next decade, until 2023. The angle between Earth and the planet’s system of rings has been gradually opening up since 2009, and will continue to do so for about another year.

To find Saturn in the night sky, try first looking to the east (in the evening, that is - look to the west if you’re searching closer to dawn) to locate Mars, which is generally easier to spot because it’s red (and at the moment enormous). Saturn should be the fainter-looking planet just below it.

Antares will be in the same area; you should be able to differentiate between the two because while Saturn is generally quite faint, its current proximity makes it brighter than Antares. Antares will have a rusty, reddish color, like Mars, but won’t shine as brightly as the Red Planet. Still can’t find them? Try looking for the constellation Scorpius; at its crown, Saturn (top left), Mars (top right), and Antares (bottom) form an inverted triangle.

More like this
Science
8.9.2022 12:30 PM
You need to see Saturn at its closest and brightest this week
By Joseph Malcomson
Science
20 hours ago
Do aliens exist? Jupiter’s moon Europa could hold the answer
By LAURENCE TOGNETTI and Universe Today
Science
4 hours ago
South Korea just launched a rocket to orbit the Moon, a first for the country
By Nancy Atkinson and Universe Today
Related Tags
Share: