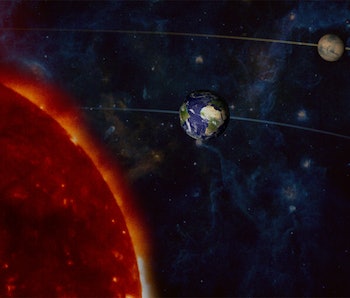 Now is a great time to see Mars without a telescope. Up to May 30, the red planet will appear larger in the night sky. Just look at the moon and then look to the right. There you’ll see Mars.

Mars, the Earth, and the Sun will align tonight with our big blue planet bordered on both sides for a once every two-year event called the Mars Opposition.

Since Earth is closer to the Sun and has a shorter orbital path than Mars, it takes our planet roughly two revolutions before Mars can make one. That means sometimes the planets are on opposite sides of the sun, known as Solar Conjunction, and sometimes, like tonight, Mars and Earth are on the same side as the sun.

Stargazers can follow the red planet through the night sky like they might follow the sun in the day. As the Sun sets in the west, Mars will rise in the east as it travels across the night sky.

To find out when Mars will rise and set each day, the Astronomical Applications Department of the U.S. Naval Observatory offers this very useful tool to calculate exactly when the red planet will be in the sky.

Here’s the Mars rise schedule (all times are Eastern):

On Monday, May 23 and Tuesday, May 24, a nearly full moon will help illuminate Mars in the sky.

And Mars will be closest to Earth on Monday, May 30. It will only be 46.8 million miles away.

In 2018 Mars will be even closer as it creeps up on breaking the 2003 record of 34.6 million miles between Earth and Mars. NASA says it won’t break the record though. Earth will pass within 36 million miles of Mars two years from now, NASA predicts.

There are also three stargazing apps Inverse recommends you use for events like these. They’ll help you find the planet in the night sky so you know where to point a telescope or squint with the naked eye.