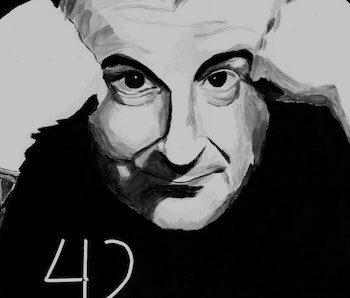 It’s Towel Day, the geek lit nerd’s annual celebration of all things Douglas Adams. The beloved author of uniquely British sci-fi silliness like Dirk Gently’s Holistic Detective Agency (which is soon to get the BBC treatment and, most famously, The Hitchhiker’s Guide to the Galaxy, the epic story of a pajama-wearing British man who finds himself on the hunt for the answer to Life, the Universe, and Everything.

Named in honor of “the most massively useful thing an interstellar hitchhiker can have,” Towel Day is held on the soonest date that could be widely organized to honor Adams in the wake of his 2001 death (seriously). The annual holiday brings with it a variety of homages to one of Britain’s most famous modern authors. Google UK wins 2016’s celebration with its new answer to the search, “answer to life, the universe, and everything”.

Adapted from a radio series written by Adams, The Hitchhiker’s Guide to the Galaxy has enamored readers of all ages since it was first published in 1979. Along with the book’s popularity has come increasingly academic explorations of the underlying philosophy of Adams’ answer to Life, the Universe, and Everything.

“The answer to this is very simple. It was a joke. It had to be a number, an ordinary, smallish number, and I chose that one. Binary representations, base 13, Tibetan monks are all complete nonsense. I sat on my desk, stared in to the garden and thought 42 will do. I typed it out. End of story.”

And while Adams himself may not have intended 42 to take on any extra significance beyond a quick chuckle, the number has come to represent something deeper to generations of readers. Though fans are tempted to look for the meaning in the realm of science, perhaps its easiest (and most satisfying) to think of 42 as exactly what it is: a symbol of life’s inscrutability. It doesn’t mean anything when you’re staring right at it, it’s a mosaic in abstract. The meaning of 42 is the lesson that Arthur Dent learns at the end of The Hitchhiker’s Guide to the Galaxy.

The meaning of 42 and the answer to Life, the Universe, and Everything is to live well and always remember your towel.

You know, honestly, it’s always boggled the mind that 42 gets all the attention when people should really be focused on why the bowl of petunias was so mournfully resigned to their fate.