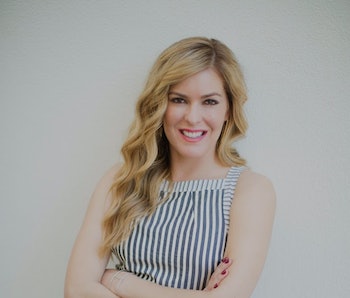 Job: Bell is the founder of Ruggable, which makes a two-part, easily washable rug system. She also appeared on the Oxygen docu-series Quit Your Day Job.

I started out in the marketing department of a hair care company in my early twenties. Then that’s where I realized how much I loved working for brands. They can do everything from running the business to numbers to picking out names for the product. You get to do a little bit of everything.

That gave me the background to know what it takes to get a product from an idea to a sellable unit. From that company, I launched a fragrance line called Flower Bell and I was able to get it into some Nordstrom stores and boutiques, but I just didn’t price it high enough. I did have a lot of mistakes in my first go at having my own business. After that, I knew I needed to wait until I had a really amazing idea — something that could really stand out. Even more so, something that could be patented. I was able to come up with this idea of the two-piece rug system and I was able to get the patent, which really really helped me get the leg up against competition and get the financing I needed.

What were some of the mistakes you made that you learned from?

Don’t go up against big companies that have big advertising and marketing budgets with something that doesn’t stand out. With fragrances and cosmetics, it’s a crowded market — so if you don’t have some amazing story or a big marketing budget or an in with celebrities or PR, it’s going to be tough. Or you should just start making six bottles in your kitchen and sell all those and then make 12 and build it up slowly.

I only had the background of working for big companies, so I went with this concept that I was going to sell thousands of bottles of fragrances. I bought them, filled them, and didn’t have any kind of method to stand out from the crowd. It’s one thing to finally be able to sell something to somebody, but at the end of the day,, you have to profit enough to be able to hire people to help you and expand your company. Those were all the hard lessons I learned in the first go-around.

Was getting a patent difficult?

It’s not easy at all. It’s a long process, and it’s also subjective. You need to find the best patent attorney you can. It increases your chances of actually getting the patent if it’s well-written and by somebody who knows what they’re doing. You can’t just have anybody drop off a patent application.

What was appearing on the docu-series Quit Your Day Job like?

I didn’t know what to expect going into it because I had never done anything like that. I actually enjoyed it and everyone from the crew to the main investors were fun to work with. I would recommend it to anybody if they have the opportunity.

What advice would you give a young entrepreneur who is looking to get a patent?

The first advice I would give is to make sure that they file a preliminary patent, which is kind of a placeholder and allows you time. It’s less expensive than the actual patent application and protects you while you go out and start finding the investment or support that you need. Even if you have the money, you need to share your idea in order to make it happen.

And what about general advice to young entrepreneurs?

You have to learn one thing at a time. You can’t just look at someone like me and say, “How does she do it?” There’s still certain things I want to do with my business that I don’t know how to do yet. You get more capable by doing it and not being afraid to get going, rather than just being scared and not learning anything. If they have an idea, make that first phone call to get the pricing of how much it’s going to cost to file that application. Don’t worry about how much it’s going to cost after that. Sometimes it takes six months to get that one thing done and then all of a sudden you get the money or something happens and you’re able to proceed. So, even though you know you can’t accomplish everything you want to right now, just accomplish that first step. That first step leads to a next step.