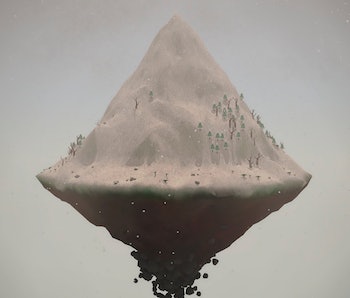 The big releases of this year so far are all either highly competitive, or highly stressful. Two of the biggest games this year are Overwatch and Dark Souls III. With so many high velocity titles in the span of a few months, it’s important to remember that not every video game is meant to barrage the senses.

Some of the most innovative game designers have been experimenting with games that either offer alternatives to action, or subvert the expected flow of, say, an action game. Here are a list of games that, in some way or another, will put you in a clearer headspace.

There are two types of people in the world: People who don’t mind getting lost for awhile, and people who truly hate it. For those who don’t mind exploring an obtuse, beautiful landscape at a snail’s pace, Dear Esther is for you. The classic puzzle game was reimagined by developers The Chinese Room (Amnesia: A Machine for Pigs) to have an even darker, more mysterious atmosphere. While there is really no visible goal in Dear Esther, the game proves that the journey is often more interesting than the destination.

One man developer Daisuke “Pixel” Amaya developed, composed, wrote, and released for free a game called Cave Story. A classic, 2D side-scrolling action game, this might not sound like a “relaxing” game in the traditional sense. However its rhythmic action does a great job at putting players in what is typically called “the zone” and its cutesy atmosphere and vibrant music will definitely put players in a better place. At least until they get further in the game where stuff gets too real.

A modern take on the farm life simulators popularized by titles like Harvest Moon, Stardew Valley quickly wraps you up in your own, idyllic frontiers lifestyle. In Stardew Valley you grow crops to sell at the nearby village, improve your farm, clear out your fields, and fall in love with a loving partner you meet at the village. If you’re tired of the daily grind of life, sit down and try it again in cute pixelated form.

Kind of like Dear Esther only more colorful and pixelated, Proteus is a walking sim where you explore a forest. The game doesn’t have objectives, but with its calming score and beautiful real-time environment, it’s hard pressed not to get sucked into Proteus aesthetic calm. It’s meditation in the form of a virtual nature hike.

Jonathan Blow’s long awaited follow-up to his revolutionary game, Braid, came in the form of this first-person puzzler. Left to explore a mysterious island (A lot of games focused on atmosphere seem to love the natural isolation of an island setting) you go around solving puzzles and uncovering the island’s many mysteries. Insanely difficult the puzzles are a work of art, unraveling its answers to you slowly and methodically. If you’re the type of gamer to get hang ups over failed puzzles, The Witness might actually stress you out more, but for those in search of patience would do well to check out this game.

Between Journey and Thatgamecompany’s previous game Flower, the video game studio has launched more explorations on elegant game design for the purpose of non-action. Sure, you can jump and fly around in Journey, but its virtues lie in its ability to evoke feelings of companionship and trust. It’s a very positive game that exudes “love” even in situations of apparent danger.

Mini Metro, the game about planning a subway route in an urban city, treats its subject like something out of a Mondrian painting. Noticing the elegant beauty in subway map layouts and design, Dinosaur Polo Club turned subway maps into a strategy game about making urban living better for everyone. It’s a gorgeous looking game that will bring out the loyal civil servant in all of us.

Imagine a game where you drive a large tanker from Switzerland to the outskirts of Paris. Or anywhere else in Europe for that matter. Either way, don’t imagine because that game is Euro Truck Simulator a game where you get to relive your dreams of driving from one place to another and blasting your favorite tunes, for hours on end. It’s oddly zen, and graphically gorgeous.

More like this
Gaming
8.10.2022 5:52 PM
19 images that prove Splatoon 3 is the Switch's most stylish game
By Robin Bea
Gaming
22 hours ago
Everything we know about Zenless Zone Zero, HoYoverse’s modern fantasy
By Jess Reyes
Gaming
8.10.2022 5:30 PM
Forspoken's latest trailer is so bad that it became a meme in seconds
By Willa Rowe
Related Tags
Share: