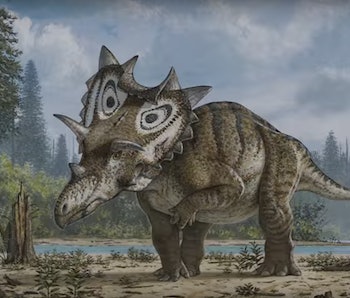 Mike Skrepnick/Canadian Museum of Nature via AP
Kastalia Medrano
May 24, 2016

More than ten years ago Bill Shipp found a femur from something resembling a Triceratops in the badlands of Montana. The accompanying skeleton turned out to belong to a new species entirely. Today, the Canadian Museum of Nature in Ottowa will open the exhibit dedicated solely to those bones that Shipp saw.

Those bones were old and the new species was officially named Spiclypeus shipporum (part of the name honors Shipp, a retired nuclear physicist), but it’s been going by the rather more endearing name of Judith.

The Canadian Museum of nature acquired the bones last year, after which they were eventually identified as belonging to a previously undiscovered species.

Following the initial discovery in 2005, Shipp got to spend the next two years working with a team to excavate the rest of the skeleton. (Or, to put another way, doing what we all expected to happen every time we buckled down to a new sandbox or patch of dirt as children.)

“I found it accidentally on purpose,” Shipp told the Associated Press, as presumably everyone within earshot nodded in complete understanding. “I was actually looking for dinosaur bones, but with no expectation of actually finding any.”

Judith was a horned dinosaur — like a Triceratops — with “projecting postorbital horncores and conjointly fused, anteriorly curled epiossifications straddling the midline of the frill,” according to the PLOS paper. Her discovery could give scientists better insight into the historical fauna and biostrata of the Judith River Formation area.

Boldly audacious though she surely was, Judith was apparently not the healthiest specimen of Spiclypeus shipporum; the paper details her “poor health” leading up to her death, noting infection and abscesses — possibly sustained in battle — that would likely have resulted in a limp. (Judith also wasn’t necessarily a female specimen, it should be noted.) Nonetheless, the paper bears witness to her bravery: “Despite these impairments, skeletochronology indicates that the animal lived at least 7–10 years, attesting to its robust constitution.”

More like this
Science
11 hours ago
NASA Crew-5 launch: Timeline, how to watch this historic ISS mission
By Harry Stoltz
Science
10 hours ago
5 lessons from the most iconic climate documentary of all time
By Tara Yarlagadda
Science
9 hours ago
October 2022 sky guide: 5 astronomical events you can't miss
By Jennifer Walter
Share: