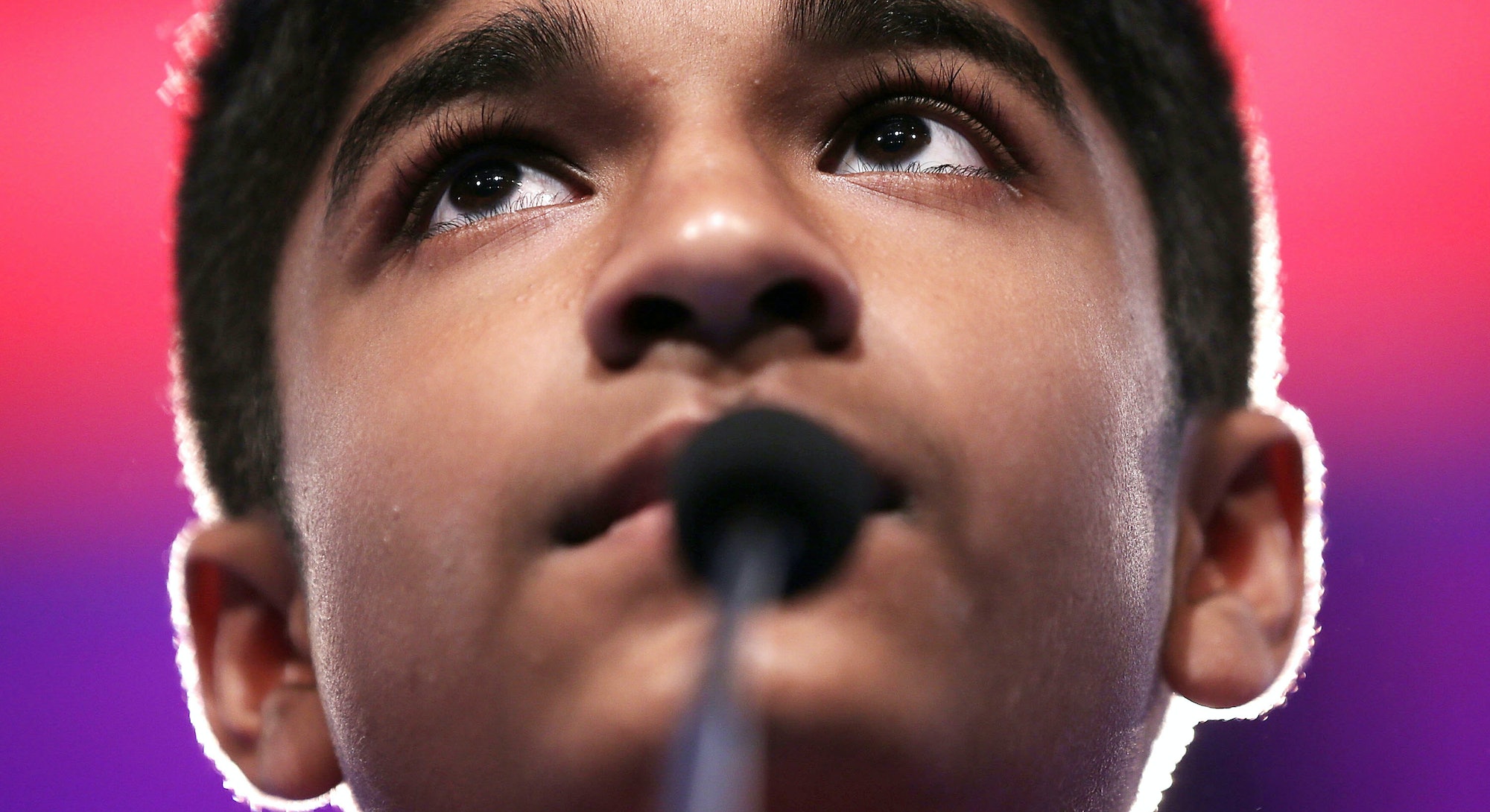 Today, 285 spellers will compete to be the 2016 Scripps National Spelling Bee Champion. The ecstasy and the agony of becoming America’s best speller younger than 15 will be split into five rounds, beginning with today’s preliminaries and ending with Thursday’s primetime final on ESPN. You’ll see tweens do something much harder than you’ve had to do in years: Spell words out loud without spell-check or autocorrect.

While academics aren’t unified in their opinion that technology has weakened the English language, the assumption is that we’re getting worse at spelling. A handful of researchers have found that programs like autocorrect on your iPhone give way to poor spelling: A 2005 Harvard study found that 37 subjects working on a task with spell-check — versus 28 subjects working without — were essentially reliant on the technology to do the spelling for them. This wasn’t so much a factor of not knowing how to spell, but instead, laziness and confidence that they didn’t need to.

“As with most ‘effects’ research on media, there can only be correlation, not causation,” Alice Daer, a digital content strategist and former Arizona State English professor, tells Inverse. “Any changes that coincide with social technologies are equivalent to the changing of language that happens organically, with or without the technology.”

While not much evidence is out there to support the claim that technology is causing a decline in language standards, the argument is still a popular one. President Barack Obama recently told Rutgers graduates that his generation “were certainly better spellers” because they didn’t have spell-check.

If that’s the argument, then it’s not the rise of smartphone autocorrect that has caused this dramatic shift — spell-check has been a helping hand to bad spellers since it was invented in the 1970s. But there have certainly always been people bad at spelling — Ernest Hemingway and F. Scott Fitzgerald both turned in manuscripts riddled with errors; even the Founding Fathers couldn’t get a hang of its versus it’s in the Constitution. The difference now is that with a proliferation of mass-produced and easily shared communication, it’s just a lot more obvious who is spelling incorrectly.

“My opinion is that, generally, with every technology and media trend, there are doomsayers who argue that the sky is falling,” Danielle DeVoss, a professor of professional writing at Michigan State University tells Inverse. “Twenty-five years ago when you wrote a letter to your grandma, if you spelled something wrong, she’d be your only audience. Today if you post a status message on your grandma’s Facebook wall, a heck of a lot more people will see your spelling mistake.”

While experts like DeVoss and Daer say that this area of study needs more research before it can be declared concretely true, there is a possibility that autocorrect is having a strong influence on language — not regarding our spelling abilities, but in affecting the “life” and “death” of certain words. In a 2012 study published in Nature a team of researchers argue that autocorrect, because it steers us toward using certain words, creates a sort of standardization that stamps out variety. It’s just not misspellings that “die” with autocorrect, but variations like “Xray” and older words like “roentgenogram.”

“We observed a correspondence between the tipping point of word adoption, a type of lifespan, and the characteristic human generational timescale, both of which are roughly 40 years,” lead study author Alexander Peterson tells Inverse. “Spell-checkers impose basic principles of reinforced selection, so that words deemed ‘more correct’ — by predetermined cultural or editorial standards — have a higher chance of reproducing.”

What is certain is that technology has made us take our relationship with spelling for granted. This is what makes this week’s Scripps National Spelling Bee all the more impressive.

These young competitors are so good that this year Scripps has decided to, in its own words, “raise the bar even higher” with the hope that the bee can be done away with tied matches. Also, words like scherenschnitte and nunatak (last year’s winning words) weren’t deemed hard enough to stop these young spelling champs. The competitors of today are spitting out words that dwarf their peers of yesteryear: For example, in 1940 the winning word was therapy while in 1967 it was Chihuahua.

Has the proliferation of texting and tweeting hurt the 2016 competitors’ ability to contend with the very best? If anything, it seems like their generation is kicking ass while spelling names.

Get more information on the Scripps National Spelling Bee at spellingbee.com.