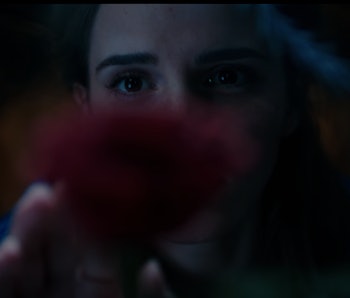 Disney released a full trailer for its live-action Beauty And The Beast remake on Good Morning America today, and though it doesn’t feature too many shots of actors, a few things are clear. A couple establishing shots of the castle look like physical locations heavily altered by CGI. We get a painting of the Beast and his parents before Dan Stevens’s big ol’ monster claws swipe at it. Disney’s animated version didn’t delve into who the Prince/Beast was before he met the witch, so it’s likely that this film will give him a more robust backstory.

Over a black screen, we hear Ian McKellen as a very serious Cogsworth shushing who must be Ewan McGregor as Lumière. That’s a character flip; it seems that in this version, Cogsworth is the more street smart of the household appliances, while Lumière’s French candelabra sounds a bit flighty in a way the animated character wasn’t. Reminder: we get to hear Ewan McGregor sing again, which he hasn’t done at length, on film, since Moulin Rouge!. Will this be the first time female audiences have curious feelings about Lumière?

And then, of course, we hear Emma Watson’s voice, calling into the dark. She discovers the magical rose, her eyes widen, and the trailer cuts to the original film’s tagline: “Be our guest.”