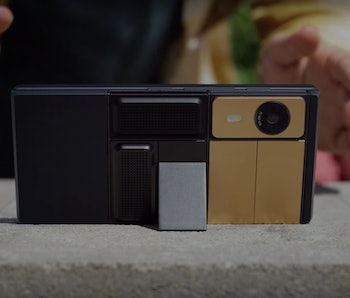 There were a ton of surprises during Wednesday’s Google I/O keynote, from VR headsets to an Amazon Echo competitor called Google Home. But one of the biggest announcements came late on the final day when Google announced its moonshot modular phone project named Ara is coming out of the ATAP research labs and to consumers in 2017.

The phone is modular, meaning each part can be easily swapped out and replaced, thus extending the life of a smartphone beyond the usual two years. Maybe you don’t like your camera any more, but don’t want to drop $600 on a new phone. Ara would allow for a much cheaper modular camera replacement, allowing you to keep the core of the phone.

Google says the main specs such as the processor and graphics card would still be housed in the main shell of the phone, but found that consumers are more interested in playing with the more aesthetic features of the phone.

A developer kit is shipping at the end of this year and Google says it plans to release a consumer version by 2017. There’s also a pretty nifty hype video for Ara to help visualize why you might want a phone like this with swappable parts.

Here are the 7 uses Google is touting during this experimental time of the phone.

This seems like the most obvious use case and one that Google has shown off before. In the past, demos have been sloppy and cringeworthy as viewers had to wait in silence for the phone to recognize the camera. But Wired got to see an in-person demo and says the feature is smooth now.

Ara could really accelerate the popularity of mobile photography. Swap out wide angle lenses, and fish eyes for that artsy shot in the park. Put a kickstand module on the front of the device for increased selfie action. Give your phone a better flash for low light scenarios. Or maybe you’re not much into photos at all and would prefer a device that focuses on video, there could be a module for that as well.

Cameras are also some of the fastest evolving tech on our phones. If you have a device that’s two years old right now, that camera probably feels pretty ancient to you, even if the phone is performing well in other areas. In the future that could be an easy and quick way to upgrade.

Most new phone batteries are fairly capable of lasting through a day of normal use, but there are days when you’re doing more than the normal use. For those days Ara would let you swap out a larger battery to get through the day.

Google also says screens could be modified into an e-reader like Amazon’s Kindle for those long plane rides. The video also shows a woman getting ready to hit that gnarly swell as she loads a surfboard into the back of her car. The phone recognized her proximity to the car and unlocked it automatically so she didn’t have to put down the board.

The fitness buffs of the world have a lot to gain from a modular design. Smartphones don’t do all the things a dedicated fitness tracker can do, so runners have to bite the bullet and buy and carry around separate devices.

With modular phones a runner could swap out pieces to make the device work for their needs. Step counters, accelerometers, GPS tracking, navigation, and media players are all possible modules to fit on Ara and enhance your fitness experience.

The measly speakers that adorn the bottom of most phones are fine for personal listening experiences but not for bumping at a party. Throw some bass-heavy speakers on an Ara device and you could have tunes for the whole house.

Ara could also be a better audio recording device. Artists already record quick soundbites on their phone, but usually those aren’t considered studio ready. Maybe Ara could usher in a new wave of young artists recording better quality songs on their phones.

This was by far the oddest feature in Google’s video. A young man is watching a movie with his date and needs to freshen up his breath for that first kiss. So he opens a compartment in his phone to expose a mint. Replace the young man with a much older adult and you could imagine that mint as a Viagra.

Beyond snacks and meds, I know a few people who would be very into the idea of different storage compartments on their phones for credit cards, physical money, or rings and jewelry.

2. Back Facing Screens and Touch Pads

In the video, Google appears to show a woman getting ready to go out, and with a simple touch of one of the back panels a ride is hailed for her. That would certainly make Uber easier, but could also lead to a lot of false rides.

Google is also touting screens on the back of the device that seem to permanently show regular home screen functions such as the weather, battery life, and the time.

Ara isn’t exactly the prettiest device yet. Rafa Camargo, Ara’s technical project lead, acknowledged as much himself. But there’s something to be said for customizing a phone to match your look for the day and that’s a potential new market Ara could definitely expose.