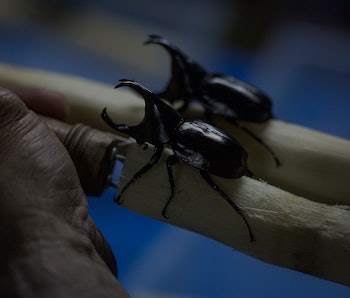 Sexual selection accounts for a lot of interesting traits in evolution.

Peacocks get lurid feathers, ducks evolve corkscrew penises, and some species just eat each other after gettin’ busy. Based on a new study with burying beetles, scientists now think that how regularly animals are getting action could completely change the shape of their genitals over a few generations.

The sex in the animal world isn’t particularly romantic. Consent is an idea that humans sorta thought up when we realized we could be smart and nice about sex, rather than animalistic mating.

For many species, sex is more of a battle — sexual conflict arises when males want to have more sex than females, which is true in beetles as well as many other larger species (but not necessarily humans!) For burying beetles, more sex is both costly and inconvenient for female beetles, while males benefit from doin’ it daily and nightly and ever so rightly.

When the beetles have a lot of sex, they quickly evolve different-shaped genitals. When they have more sex, the males get longer penis-like organs (note, over several generations, so stop typing your “ONE QUICK TRICK TO A BIGGER DICK” emails). Females evolve “claws” on their genitalia to discourage mating (just like duck’s “decoy vaginas” and corkscrew penises).

“It takes two to tango,” said Dr. Megan Head, one of the authors of the study says. “When changes in shape in one sex leads to corresponding changes in the other sex, this is known as co-evolution.”

Scientists think that sexual conflict could be the reason there are so many different shapes of genitals in the animal world, even though general body shapes are somewhat consistent among members of the same group (birds look like birds, four-legged mammals all have similar bones, etc.)

“Our research demonstrates the general importance of conflicts of interest between males and females in helping to generate some of the biodiversity that we see in the natural world,” said Dr. Paul Hopwood, a professor at the Centre for Ecology and Conservation at the University of Exeter. “It’s fascinating how genital evolution can happen so fast – in ten generations – showing how rapidly evolutionary changes can occur.”