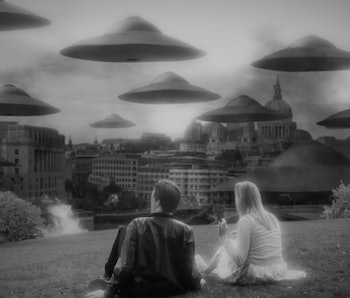 When we talk about aliens these days, we’re almost always talking about one of two groups: extraterrestrials or immigrants. It’s confusing and racist and it needs to stop. The word should exclusively refer to E.T. and not just for reasons of common decency. Scientists need it.

The word “alien” has a strange history. Derived from the Latin word aliēnus, meaning “belonging to someone else,” the term arose sometime in the mid-14th century and was initially used to describe something as strange or of foreign origin. When dark age monks described something as alien, they meant it seemed unnatural within the context of the society and ecosystem.

The first recorded use of alien to mean “not of the Earth” was in 1920 — though one suspects it had happened previously. The word took off with the invention of the aircraft and the subsequent invention of the space shuttle. The general public, seeing unexplainable vehicles in the air, got curious about UFOs. Area 51 became a national obsession. Aliens were even given corporeal form: the grey skin, the tapered heads, the big wet eyes. The blockbuster movies solidified the association. Movies about aliens were very rarely — the eventual exception being Men in Black — about immigration issues.

But science fiction didn’t just cement the new meaning of the word alien, it layered implications on it. The alien invasion genre boomed in the 1950s as studios released films like The Thing From Another World, It Came From Outer Space, Not of This Earth, and Devil Girl From Mars and the negative connotations stuck. One could argue that the films were already giving voice to racist sentiment, play-acting fears about the incursion of African-Americans into traditionally white neighborhoods, but either way it became clear that to be “alien” meant to be threatening.

“[T]he concept of the alien has subtle social consequences,” University of California at Davis School of Law Dean Kevin Johnson wrote in a 1997 paper that ran in The University of Miami Inter-American Law Review. “[I]t helps to reinforce and strengthen nativist sentiment toward members of new immigrant groups, which in turn influences U.S. responses to immigration and human rights issues.”

Still, the federal government continues to use “alien” as a legal term to describe immigrants and guest workers. The OG example of this is the United States Immigration and Nationality Act. Chapter two of the act is entitled, “Qualifications for Admission of Aliens; Travel Control of Citizens and Aliens.”

Thankfully, people are starting to excise “alien” from the immigration lexicon in favor of words that are less disparaging. The most notable example is the set of revisions made to California’s labor code. But there’s another side to this argument that isn’t even about our tendency to dehumanize our own species.

Since humans began gazing off into the stars, our species has pondered the potential uniqueness of its position in the universe. Are we alone? This used to be an abstract, almost philosophical question. Now, it isn’t. Scientists are devoting resources into investigating whether life can survive on other planets — and whether it already does. Sure, the Breakthrough Starshot initiative helmed by Stephen Hawking has some issues to work out if it’s going to search Alpha Centauri for life, but it’s a serious project. The search for aliens is a serious project.

And this is where the politicization of the word gets problematic. As it stands, the general public struggles to talk about aliens without being dismissive or whimsical, which is totally fine unless we actually find some (or they find us) at which point democracies will remain largely unprepared to have a policy discussion. The scientific community needs to take back the word not only so that serious endeavors are taken seriously, but also so that humans can brace themselves for success. The recently revised Drake Equation indicates that the chances of life existing elsewhere in the universe are very high. With emerging technologies allowing us to search further than ever before, it’s not unreasonable to think there’s a chance we will find something.

So how can scientists take back “alien”?

Scientists — and the media that reports on science — specifically need to do more to demonstrate why research into alien life matters. That doesn’t just mean brewing excitement. It means explaining what we might learn from non-Earthlings and how we might be able to apply those findings to improve our own lives and the lives of future generations. If the world’s preeminent expert on black holes can talk about aliens without irony or implication, the general public should learn to as well. In a sense, this is the easiest part of a much longer conversation about extraterrestrial life. The sooner we define terms, the more productive that conversation will be and the more prepared we’ll be as a global society to have it when the time comes.

More like this
Science
8.2.2022 9:15 PM
Alien friendly? A nearby planet poses a vexing habitability puzzle
By Kiona Smith
Science
8.12.2022 2:00 PM
Biologists fired tardigrades out of a high-powered gun — the results have implications for alien life
By Kiona Smith
Science
8.7.2022 9:00 PM
Scientists now know how likely you are to be killed by space junk
By Monica Grady and The Conversation
Related Tags
Share: