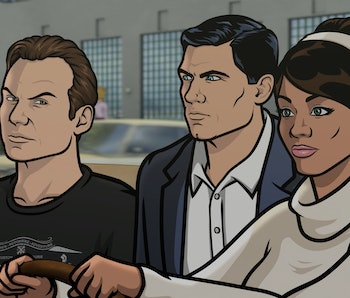 With three episodes left in the seventh season, Archer finally sets up for its grand reveal, first teased in the pilot: Is Sterling… dead? The mystery of the apparent murder scene in Veronica Deane’s pool has cast a darker-than-normal shadow over the show’s usual jokes and jackassery, and in episode eight, “Liquid Lunch,” we finally get a clue as to where it’s all headed. Hint: It’s really fucking weird.

But Archer’s gonna Archer, so the story, inevitably, does not unfold very neatly. Instead, we get a particularly disjointed episode, which opens with the return of CIA dickbag Slater (Mr. Robot’s Christian Slater), who needs the crew to track down a former MK Ultra (the CIA’s notoriously cruel mind control program) guinea pig with a death warrant for a Soviet dignitary. Strapped for cash — Country Day Preschool ain’t cheap — Lana and Archer dive in, unprepared for the consequences the mission will have on their on-again, off-again relationship.

Meanwhile, Krieger’s running his own version of the MK Ultra experiments back at the office after betting his colleagues he could hypnotize them without resorting to psychotropic drugs. Taking up the challenge — if they manage to resist, they don’t have to watch Krieger performing Jo Jo Dancer in blackface — they end up being drugged anyway (scopolamine, the “zombie drug,” is no joke). A hilariously choreographed video of the zombie crew doing their best animal impressions ensues, vaguely reminiscent of Arrested Development’s long-running chicken gag.

But the hypnosis plot is just a ruse for Herr Doktor’s master plan: While Pam, Cheryl, and Cyril romp around like de-underpantzened pugs, he brings a glassy-eyed Mallory down to his darkened lab, unveiling his creepy, cyborgian project: A complete crew of robot clones.

The show had hinted that a duplication scheme was in the works; we’ve already caught a glimpse of Krieger’s closet of hands and faces, and last episode revealed he was working on a Voight-Kampff machine, used in Blade Runner to distinguish replicants from humans. But nothing could have prepared us for the genuinely unnerving shot of the red-eyed robot clones, clad in futuristic white undergarments, standing at attention in their darkened bays. Here, Krieger achieves a level of creepiness we never thought he’d reach, but perhaps it’s all for the sake of the team: Body doubles can save lives — by floating face-down in a pool, perhaps — as long as their creators can tell them apart from their human counterparts. Will all of the robot clones play a role in the finale, or is Krieger just keeping them for, y’know, “safekeeping”? Either outcome is possible for the increasingly mad doctor.

Neither the Slater nor mind control plots fit into the other, resulting in a somewhat unsatisfying, unresolved episode, but it did make room for the show to explore the disintegrating relationship between Lana and Archer, which has been careening toward a massive shift all season. It takes Sterling’s first waterboarding experience — a scene Adam Reed conspicuously leaves out — for him to confess to his “genuine” feelings for Veronica Deane, leading to the couple’s official “break” (“Old people love sherbet!” a jealous Lana yells). Couched among scenes dealing with attempted suicide, illegal mind control, a nod to the Artichoke project, and a ton of Nazi references, the torture-induced breakup appears to be delivered lightly, but it’s propelled by the noticeably dark undercurrent that’s driving the season toward its dramatic close.

More like this
Innovation
Jan. 19, 2023
A robot choreographer reveals why M3GAN — and all robots — should dance
By Molly Glick
Gaming
Jan. 21, 2023
How to unlock January and the true ending in Persona 3 Portable
By Willa Rowe
Entertainment
3 hours ago
The Last of Us Episode 3 ending explained: The tragic short lives of [SPOILERS]
By Dais Johnston
LEARN SOMETHING NEW EVERY DAY.
Share: