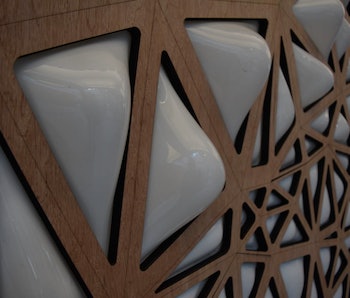 At its most distant point along its orbit, the dwarf planet Pluto is some 4.5 billion miles away from Earth. But, even at this unfathomable distance, the planet maintains remains relevant to architecture down here on Earth. The reasons why are both mathematical and human and that human bit is named Winston Yuen. An architecture student at the University of Calgary, Yuen has used photographs of Pluto’s sunset to create a bubbled parametric wall, a potentially load-bearing sculpture that leverages algorithm to make extraterrestrial imagery into an eye-catching Earthly achievement.

Everyone in Yuen’s fabrication class was provided the same photo of Pluto’s sunset from NASA’s New Horizons team then asked to remove data from it using various coding systems. As Yuen explains, his approach had more to do with creating a sustainable system than with attempting to reach a set goal. Yuen employed parametrics — or the process of using algorithms to manipulate the relationship between certain design elements — to re-render the image in geometric form.

If that sounds complicated, it’s because it is. First Yuen imported the image into a program called Grasshopper, which came up with data points based on the black and white gradient of the image of Pluto’s sunset. An algorithmic process called Delaunay Triangulation connected the data points into triangular shapes, which were then made into wooden frames using an industrial-sized laser cutter for the next step: melting the plastic to create the protruding mounds you see in the finished product.

Yuen decided the largest hole should display the tallest plastic mound so as to establish a linear relationship between these two variables and variation among the rest of the frames. Rather than manipulating the height of the plastic droop using a vacuum, Yuen and his project partners opted to let gravity take its course and make catenary curves, or the natural curve that material assumes under its own weight. When the melting process was finished, the plastic protrusions were cut out with an x-acto knife and sandwiched between the wooden frames. Some finishing touches with black paint, and voila, a black and white NASA image of Pluto’s sunset has been converted into a parametric wall sculpture.

While the coding involved in Yuen’s process may intimidate architects who follow traditional methods, it is an innovative construction solution to problems we face today. Known as parametric articulation, this method of architecture can help alleviate the growing concern of climate change, for example. A pioneering architecture firm in Boston called MASS Design Group employed parametric articulation in its design of a cholera treatment center in Haiti, which improves air circulation and lighting and prevents recontamination through energy-efficient architecture.

Yuen’s Pluto sculpture may be a smaller scale school project, but the parametrics he employed point to a specific type of architecture that coincides with an ever-digitizing world. With machines and computers becoming more popular in manufacturing and fabrication, the use of parametrics will surely become more prevalent too. Furthermore, the endless mine of possibilities within this architectural method allows forward-thinking architects to push the boundaries of parametrics, especially since machines have replaced human labor in so many areas. The days of meticulous attention to detail and tedious physical labor are far behind us.

“We’ve got robots to do that now,” Yuen says.