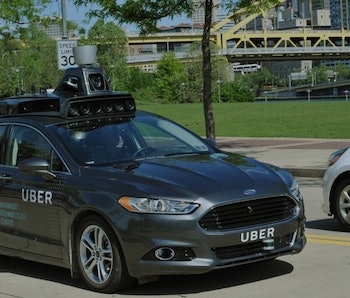 Uber confirmed for the first time ever Thursday that it is testing its own self-driving car on the hilly streets of Pittsburgh.

The modified Ford Fusion, which was developed by Uber’s Pittsburgh-based Advanced Technologies Center, is officially debuting on the city’s streets to test its capabilities and collect mapping data. For now, there’s still a human behind the wheel, an Uber spokesperson said in a blog post.

Now, Uber is ready for its close-up. It allowed a Pittsburgh Tribune-Live reporter into the Fusion on a test drive Wednesday, where the car was able to detect jaywalkers, bicyclists, and even a rogue goose. So far, Uber’s self-driving cars have no reported crashes; Google’s self-driving cars, which have been on the roads for years longer, have been involved in a number of collisions, including four so far this year, the company has reported.

Uber’s Advanced Technologies Center head John Bares told the Tribune-Live that Pittsburgh — aside from being a robotics hotspot thanks to Carnegie Mellon University — is ideal for testing out self-driving cars thanks to aging infrastructure and Midwestern snow and rain. “We have the world’s best test site right at our doorstep,” Bares said. “We view it as, it’s not quite Everest, but it’s a hard mountain … But the beautiful thing is we do have that mountain right out of our front door to climb.”

In April, Uber, Google, Ford, Volvo, and Lyft formed the Self-Driving Coalition for Safer Streets to encourage federal action that would pave the way for automated cars to be deployed across the country. Currently, companies testing self-driving prototypes must follow specific state and city laws — a policy patchwork that would inevitably present challenges for a nationwide roll-out.

An Uber spokeswoman declined to provide further details about the self-driving car to Inverse, so it’s unclear what the company’s timeline looks like going forward. But it’s safe to say that, after Uber’s public debut this week, it’s full speed ahead toward a future in which Uber can grow unfettered by pesky things like drivers’ wages and rights.

This story has been updated to include comment from Uber.

More like this
Innovation
8.16.2022 11:00 AM
Scientists finally found an efficient way to recycle plastic foam — it could make them rich
By Joanna Thompson
Innovation
20 hours ago
Can we terraform Mars? Scientists may have made a major breakthrough
By Jeff Nagle
Innovation
23 hours ago
Scientists create fake leaves that generate a clean fuel source
By Sarah Wells
Related Tags
Share: