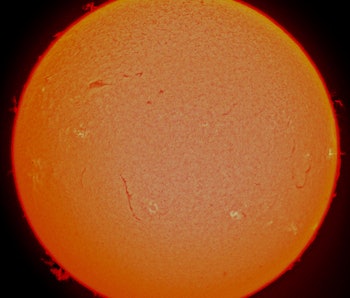 At 4.5 billion years, our sun is basically smack dab in middle age. It will continue to grow over another 5 billion years, ballooning into a cooler, dimmer red giant anywhere from 100 to 1000x its size today.

The sun will inevitably swallow up Earth and the other planets of the inner solar system, and spell the end of all life.

It may also signal the beginning of something profoundly interesting for other worlds of the solar system. A new paper written by Cornell University astronomers and published in The Astrophysical Journal suggests that as our yellow sun grows into an old red star, it may create habitable environments on icy worlds like Jupiter’s moon Europa, Saturn’s moon Enceladus, the dwarf planet Pluto, and elsewhere, and offer a safe haven for extraterrestrials that have managed to flee Earth or perhaps are ready to start evolving on those rocks themselves.

As the sun expands, it will undoubtedly begin to lose heat and become dimmer — that much is certain. However, it may be large enough to finally provide more heat and sunlight to places situated on the outer rim of the solar system — many of which are covered in frozen oceans of water. If a red star were able to turn that ice into liquid water, we could see those places transform into habitable worlds of their own.

In several billion years, they could be the kinds of places successors to humanity could quickly adapt to and make their home. That might also allow for any ingredients for primitive life to finally become loose and mix with one-another to foster new life. For example, that could indeed be the case with Enceladus, which is a frozen tundra with a subsurface ocean and exiting geothermal activity. The moon of Saturn has E.T. researchers enthralled with the idea it might be host to primitive organisms.

“Long after our own plain yellow sun expands to become a red giant star and turns Earth into a sizzling hot wasteland, there are still regions in our solar system, and other solar systems as well, where life might thrive,” says study co-author Lisa Kaltenegger.

That’s incredibly fun to think about, but there’s also a more practical value to this new study that’s relevant to researchers. In thinking about the ways in which a red star could encourage habitable conditions on a planet, Ramses and Kaltenegger say that exoplanet researchers will want to investigate new planets and deduce whether their host star could one day encourage alien life.

This new study suggests that when the sun becomes a red giant it will only provide a habitable zone for about 500 million years, which isn’t a long time to allow life to evolve. But some red giants can subsist for about nine billion years, which is plenty of time to get the organic soup rolling into single-cell systems. Astronomers currently know about 23 red giants within 100 light years of Earth, with another hundred close to becoming red giants.