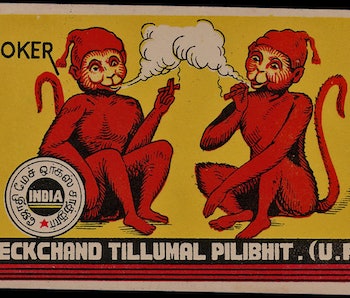 Blaming the failure of the Drug War on poor law enforcement is like blaming ineffective sex ed for unwanted pregnancies. The desire to get high, like the desire to get laid, is not a bug, it’s a feature of almost every animal on our planet. Earthlings of all shapes and sizes demonstrate an innate desire for intoxication and live on a planet positively dense with substances capable of providing that fix.

While there’s no question that the natural urge to get high can be dangerous — like us, inebriated animals frequently endanger their own lives — attempts to curb the urge itself inevitably fail. Biology is, as Freud said, destiny (at least in this one regard). It makes sense then that we focus on mitigating the unintended and harmful consequences of intoxication, notably addiction, rather than attempting to combat an urge. When we think about drug policy, we should consider the Bohemian Waxwing.

The Bohemian Waxwing, which lives in northern Canada, is often seen getting drunk off fermented berries from rowan trees. Once they’re sufficiently liquored up, the birds can neither fly properly nor walk straight. And occasionally, they really overdo it, and end up going straight into plate glass windows and windshields. Like driving drunk, flying drunk is incredibly dangerous.

Do Canadians discuss the crisis within the Waxwing community or ban rowan trees? They do not. They recognize, rightly, that waxwing inebriation is the product of an animal interacting naturally with its environment. Intoxication is a fact of the regional ecosystem. They have, however, taken to putting some extremely hammered birds into avian drunk tanks in order to protect them from — and this distinction is critical — cars. The drunk birds need to be shielded from the thing that is unnatural, which is not the thing getting them drunk or the state of inebriation. The unnatural thing is the glass and metal container going 50 MPH on its way to Whitehorse. The cage protects the birds from the manmade world, from modernity, but not from their natural instinct.

Similar drug-seeking behaviors extend into the mammalian kingdom, where species prefer to live even more dangerously. A 2014 BBC documentary, Dolphins: Spy in the Pod, showed a crew of young dolphins chewing on a poisonous pufferfish and passing it around like a joint. Tetrodotoxin, a naturally occurring neurotoxin that naturally occurs in pufferfish, is a known paralytic agent that, at high enough doses, freezes up the muscles that control breathing, causing death by suffocation. But, at smaller doses, it causes what appears to be a trance-like high. Sufficiently intoxicated, the dolphins hang out at the water’s surface, seemingly mesmerized by their own reflections.

But perhaps the best evidence for the natural craving for insobriety comes from a species much more closely related to us: Vervet monkeys, which were introduced to the Caribbean after slavers brought them over the Atlantic from Africa in the 18th and 19th centuries, learned to get drunk off of sugarcane fermented long enough to produce ethanol. In 1993, scientists studying these monkeys discovered that one in five of them were more likely to take an alcoholic drink over a sip of sugar water. Research believes this suggested not just a biological urge, but a social appreciation for liquor. Notably, teenage monkeys drank more than their older relatives, a phenomenon the researchers chalked up to the societal pressures of adult monkey life, which requires a degree of level-headedness to navigate.

The examples don’t stop there. Wallabies have been known to seek the opium high of poppy seeds, felines are suckers for catnip, and stories of uncharacteristically aggro South African elephants drunk off the fermented fruits of the marula tree (Amarula has an elephant on the label for a reason) have been documented for over two hundred years.

Of course, it bears considering whether these animals are deliberately getting drunk and high or whether we’re just projecting human behaviors onto them, in the same way we interpret animal aggression as assholery and turn them into memes. In some cases, our tendency to “humanize” animals has led us to false hypotheses: In 2006, scientists argued that it was “extremely unlikely that the aforementioned marula-using elephants were really drunk at all, given the sheer amount of fruit that theyd have to eat to get that intoxicated.” Still, they didn’t question the fact that the elephants were, indeed, acting strangely, suggesting that another intoxicant — poisonous beetle pupae, perhaps — was at play.

It’s also important to distinguish between animals getting high in the wild and animals forced to get high in the lab; cocaine-addicted lab rats, for example, don’t illustrate drug-seeking behavior. They simply show that animals can be cokeheads.

Our current approach to the war on drugs perfectly illustrates our bullheadedness: Rather than focussing on how to keep people safe while they inevitably get intoxicated, we’ve chosen to spend billions trying to keep people from getting intoxicated. Is driving while intoxicated acceptable behavior? Absolutely not. But it’s the car, not the high, that represents an ecological incongruity. The problem is that we’ve constructed a world in which it is dangerous to be altered. We desperately need to protect ourselves from it with both laws and tools. Drugs have, in many cases, harmful side effects. So does the built world. We have to remember that what jeopardizes both waxwings and humans is, more often than not, the way sober humans live.