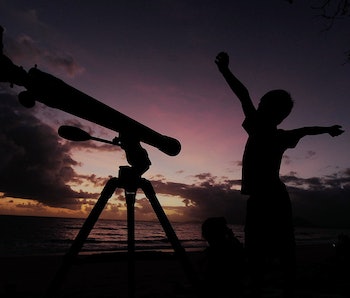 In 1973, Doug Berger had a plan to bring astronomy to the masses. He was the president of the Astronomical Association of Northern California at the time, and he wanted to entice people across the country to take a peek through a telescope and see the stars first hand.

Berger and the AANC set up telescopes on street corners, shopping malls, parks, and other urban centers to bring the tools to the people. It worked, and people were hooked. Thus Astronomy Day was born, and May 14 marks the 43rd celebration.

Astronomy Day is designed around the idea of “Bringing Astronomy to the People.” It has grown into an international event (check the AstroLeague website for the nearest location) held every spring on the Saturday closest to the first-quarter Moon.

Even with NASA’s impressive space documentation on social media, there’s nothing like going out and seeing the stars for yourself. In particular, there are five things to look out for today. If you need a little extra help, there are plenty of stargazing apps for that.

Jupiter can be found in the southern sky earlier in the night. Check in around 9 p.m. or so.

The two planets will be close together in the southeastern sky later in the evening, around 11:30 p.m.

Look into the Southern sky in the late evening to see Virgo — the heroic maiden of the sky. The Virgo Cluster of galaxies can be seen just above the maiden herself, and the Sombrero Galaxy is to the bottom right.

Canes Venatici — AKA “the hunting dogs of the gods” — is a good way to locate Messier 51, or the Whirlpool Galaxy.