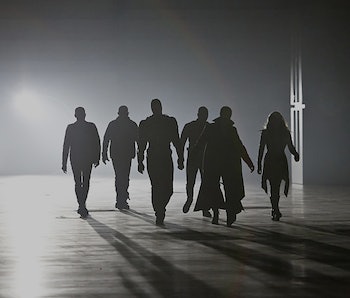 Of all the DC characters to hop aboard Rip Hunter’s (Arthur Darvill) Waverider in the sci-fi romp Legends of Tomorrow, the super-villains Leonard Snart, a.k.a. Captain Cold (Wentworth Miller) and Mick Rory, a.k.a. Heat Wave (Dominic Purcell) seemed the least suitable. Their inclusion appeared as though DC TV favored fan service over sensible storytelling. But as the series progressed the two proved more than bones thrown to fans. Sometimes, they were downright necessary.

Among a noble crew, Cold and Heat Wave were two rogues whose thoughts and actions you could never read or predict. Sometimes, they came through, as a snarky conscience for the superheroes who dared tread a darker side. Other times, they were out for themselves, scheming to heist their way to an early retirement.

But on “Destiny,” the emotionally powerful penultimate episode of the show’s impressive first season, Snart and Rory opt to sacrifice themselves for the betterment of the crew. And as all things, the two bicker and fight, and it’s just Cold who bites it, leaving Rory with the crew — and a hunger for revenge.

Picking up after last week’s “River of Time,” “Destiny” begins with the crew — Rip Hunter, Rory, Ray Palmer (Brandon Routh), and Professor Stein (Victor Garber) — in confinement by the Time Masters after Rip learned they’re working with (but not for) Vandal Savage (Casper Crump), who gleefully goes off to kill Rip’s family as Rip fought so hard to stop. Meanwhile, Jax (Franz Drameh) returns to 2016 to seek the help of a past Stein, while Snart and Sara (Caity Lotz), who hid away when the ship was boarded, try to break their allies free. Kendra (Ciara Renee) is a personal prisoner of Savage, and stays the entire episode strapped to a chair, basically. Carter (Falk Hentschel) is… Well, he’s somewhere.

During confinement, Rip learns from the Time Masters that everything, EVERYTHING is planned out by them, and that free will and agency are illusions. The Time Masters dominate thanks to an all-seeing doo-hickey called the Oculus, which is a lot bigger than a VR headset. The Time Masters wanted Rip’s family to die, to gather a team and mess shit up across time and space, in order for Savage to seize control of the future. Savage, for all his, erm, savagery, has actually united the world that will suitably prepare it for the coming war with the Thanagarians. (Comics alert: The Thanagarians are from the alien planet Hawkgirl and Hawkman are originally from.)

Thanks to plot, nothing inside the Vanishing Point are determined by the Oculus, which allows Rip and the other Legends to destroy it and finally own their own fates. It’s all symbolic and metaphorical too, yes, but it also works on a basic plot level because it will naturally lead to the final confrontation.

But smaller in scope but bigger in personal stakes is Rip, from the Oculus, witnessing a vision of Ray Palmer’s demise. The vision comes dangerously close to becoming reality when the crew attempts to destroy the Oculus. But because no one should be powerless to fate, Snart takes Ray’s place, allowing the rest of the team — including Rory, including Sara, who steals a goodbye kiss — to get away. “No strings on me,” smirks Snart with signature delivery from Miller, who died so he can shoot the Prison Break revival.

Yeah, Snart is dead — for now? Because it’s the internet, news surfaced on Deadline after the episode that Miller has signed a “series regular” contract. As best as I understand it, Miller won’t be a regular in Season 2 of Legends of Tomorrow but will be a regular presence across all the DC shows, including The Flash. So, is he actually dead? Well, time travel is a flexible thing. And this is Captain Cold we’re talking about: You never know what he’s planning.