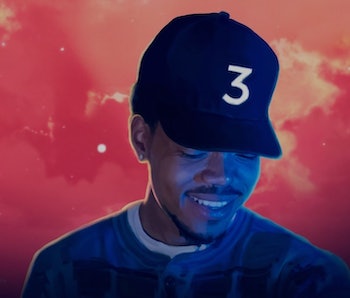 Happy Thursday! Chance the Rapper’s all-new album hit the airwaves this evening, after undergoing a last-minute title change from Chance 3 to Coloring Book. This marks the Chi-Town native’s first album since his 2013 release Acid Rap, and features big-name stars such as Kanye West (who featured Chance on his latest album, The Life of Pablo), Jeremih, Young Thug, and Lil Yachty. The album is available now through Apple Music.

The rapper himself has been recovering from a spell of pneumonia that led to a hospitalization and the cancellation of his appearance at Monday’s NYC benefit for the Robin Hood Foundation. Regardless, the album’s debut pushed forward, with an early release of “No Problem” (featuring Lil Wayne and 2 Chainz) dominating radio stations for most of Thursday until the album’s evening release.

Several small leaks succeeded in teasing eager fans leading up to tonight’s debut, including tracks such as “Angels,” which features Chicago-based newcomer Saba on an energetic track that will definitely change the mood of any listener. Other tracks bring out some well-known talent: “Smoke Break” is an essential summer jam that moves with the ease of Future’s smooth bars guiding the backbone of the tune. The full track list fills out with even more:

All We Got (feat. Kanye West and Chicago Children’s Choir)

Summer Friends (feat. Jeremih and Francis and the Lights)

Fans can get in the action by designing their own Coloring Book apparel or grabbing some from the rapper’s website.

More like this
Gaming
8.9.2022 6:46 PM
League of Legends Star Guardian concept art is an emotional trip
By Robin Bea
Gaming
11 hours ago
After Nintendo, Reggie Fils-Aimé wants gamers to give the metaverse a chance
By Tom Caswell
Entertainment
10 hours ago
Star Wars theory reveals a dark truth about Obi-Wan Kenobi
By Dais Johnston
Share: