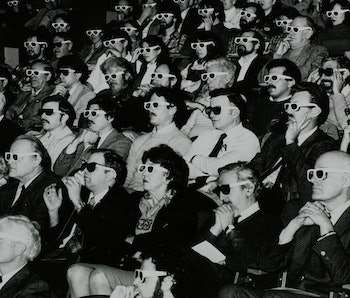 Every living organism emits chemicals into the world around it. But, while evidence has long made it clear that plants and insects use chemical signals to “speak” to their respective species, research was foggy when it came to human emissions. However, a new study clears the air: While it remains unclear exactly how humans send out chemical signals, researchers have found that chemical patterns in the air around crowds correspond to human emotions. Specifically, they found this to be true in a German movie theater.

Scientists from the Max Planck Institute for Chemistry and the Johannes Gutenberg University conducted their research at the Cinestar Cinema in Mainz, where the scientists installed special devices in the theater’s technical room capable of recording carbon dioxide, isoprene, and hundreds of other chemical components exhaled by the theater’s audience. They took measurements of the chemical molecules every 30 seconds via a mass spectrometer inserted into the theater’s ventilation system, allowing them to have detailed measurements throughout each movie they screened.

Overall, they studied more than 9,500 people who overall viewed 108 screenings of 16 different films, including The Hobbit, The Hunger Games, and The Secret Life of Walter Mitty. While the films were screening, volunteers labeled each film scene (humor, dialog, fight scene, etc.) so the researchers could go back to the 30-second interval measurements and coordinate the readings of those chemicals to what was going on in the movie. They found that throughout the various screenings of the same films, the difference in chemical patterns were consistent throughout the various scenes and were particularly evident in suspenseful or funny scenes.

“We were wondering whether it is possible to chemically differentiate between scenes in which different emotions are induced,” said study leader Jonathan Williams in a statement. “It appears that we can measure whether there is suspense in the air.”

It’s not known what physiological processes cause the formation of these molecules, which cause carbon dioxide and isoprene levels in the air to increase, but Williams and his team hypothesize that it has something to do with the changes that happen when people breathe faster or become restless. Regardless, that we can use chemical patterns to pinpoint changes in emotion could be a handy tool for enterprising folk, whether they’re pollsters, advertisers, investors, or just businesses who want to test for company wellness. Where else could this come in handy?

For now, the researchers behind this work are going to stick with movies. Their next experiment will be using this chemical device to measure the mood during Star Wars.