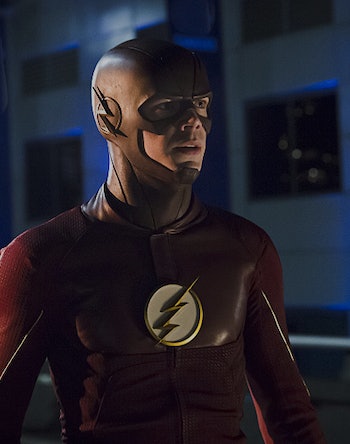 Last week we looked at what protects The Flash from the ill-effects of super speed. Turns out that traveling at, or above, the speed of sound causes a lot of problems like getting cut up by bugs, accidentally killing people you’re trying to save and getting burned by friction. Why’s The Flash safe from these life-threatening problems? In short, it’s because of the Speed Force Aura — an invisible protective barrier that shields him from crazy amounts of friction, impacts at super speed, and acceleration that would almost definitely kill him and anyone he’s carrying.

But let’s consider a hypothetical scenario in which the Speed Force Aura doesn’t exist. What would The Flash’s suit need to be made out of in order to protect him from the incredible heat produced by friction? To borrow a phrase from Mark Watney, we’re “gonna have to science the shit out of this.”

Before we get into it, let’s establish one thing: We’re going to be talking about The Flash from The CW show. There are a number of different interpretations of The Flash, his abilities and his suit, but because The CW’s interpretation is, for right now, the most recognizable, that’s the suit we’re going with.

Here’s what we know about the suit: When Cisco Ramon introduces Barry to the suit, he explains that it was developed to replace bulky turnouts for firefighters. It’s lightweight, protects against abrasion and is enormously heat-resistant (helpful, considering what he’ll be up against), and Cisco says that it’s made with a “reinforced tripolymer.”

Got it? Cool. Let’s get to the science.

Adam Weiner, a physics instructor and author of Don’t Try This At Home! The Physics of Hollywood Movies, weighs in on some of the specifics of super speed and its super-sized challenges — namely the forces at work on Barry Allen when he gets up to crazy-high speeds and what kind of and how much abuse his suit and shoes might need to be able to withstand in order to keep up with him.

We’ve seen The CW’s version of The Flash reach Mach 2 (and above), so, knowing that he’s fully capable of reaching Mach 2 (1500 mph or 700 m/s) unassisted, we’ll use that as a benchmark for our calculations. Let’s start with the force The Flash will have to contend with when he’s moving at super speed.

“Doing a rough calculation of the air resistance force acting on Flash at [Mach 2]…gives a value of about 120,000 Newtons (about 27,000 pounds) of force,” says Weiner. “According to Newton’s first and second law’s of motion, in order to maintain a constant velocity the net force on Flash must be zero. This means the force propelling him forward (static friction between his feet and the ground) must be equal to the air resistance force when he is moving at constant speed.”

120,000 Newtons is a lot of force. As you might imagine, the ability to exert that force is going to be a challenge, particularly when common materials aren’t exactly equipped to help us out in the static friction department on quite this scale.

“There is a maximum “stickiness” that occurs between any two materials called the coefficient of static friction,” says Weiner. “Coefficients for most materials range between a value of 0 (no friction at all) and 1. Using this maximum static value the greatest force that could exist between Flash’s feet and the ground without his foot simply slipping back would be around 800 N!”

So with your run-of-the-mill materials, The Flash is only going to be able to get up to about 800 Newtons without slipping (which is pretty counterproductive to acceleration). That’s a lot less than 120,000 Newtons, so what does that mean for The Flash’s superhero turnout? Well, it’s not just The Flash’s suit that’s going to need to be special.

“This means the static friction force between his feet and the ground would need to be 150 times greater for him to actually be able to run at that speed,” says Weiner. “In fact, working the calculation the other way the maximum speed that Flash could run would be only around 50 m/s (110 mi/hr) before his feet would slip. He’s going to need some very special shoes!”

Unfortunately, we probably don’t have the material with a high enough coefficient of static friction to enable The Flash to go 1500 mph (or more). We know that the Speed Force Aura all but solves these problems for us, but remember: we’re suspended the SFA for the purposes of a hypothetical super suit discussion. So, moving on, let’s talk about the problem of acceleration.

The Flash gets up to speed very quickly. It’s handy, considering he’s got places to go and needs to get there in a flash (sorry), but it presents some issues with regards to the human body’s ability to withstand insane amounts of gravitational force.

“If it takes him one tenth of a second to do this his acceleration will be a = change in velocity/time = 700 m/s/0.1s = 7000 m/s/s,” says Weiner. “That’s an acceleration of 700 g’s which is fatal to a normal human. If he takes a second to get up to speed that reduces the acceleration to 70 g/s which could still be a major health issue and he might have a black out. In order to survive Flash is going to have to make sure he picks up speed over several seconds in order to reduce the accelerations he experiences.”

Okay, so acceleration isn’t really a suit problem, and yes, once again, it’s fixed with the explanation of the Speed Force Aura, but something to think about as we consider the real-world implications of superpowers.

Beyond the frictional challenges that exist between The Flash’s foot and the ground and the big problem of force in acceleration, there’s also the major concern that The Flash’s suit might, um, burn up. Friction means heat. A lot of friction means a lot of heat. Heat burns things, so we’re going to need a material for The Flash’s suit that doesn’t burn up.

Enter: Nextel. A ceramic material used on spacecraft to protect them from burning up as the re-enter the atmosphere, Nextel is crazy heat-resistant. NASA describes it as, “Stronger than aluminum, fireproof and able to withstand meteoroids.” Capable of withstanding heat in excess of a few thousand degrees and becoming stronger than an aluminum plate when combined with Kevlar (the stuff of bullet proof vests), Nextel’s the best option we’ve got for a real-life equivalent of Barry Allen’s suit.

It’s not a “reinforced tripolymer” but it does actually exist, and it stands up to the demands of The Flash pretty realistically.

“As far as the heat resistant properties of his suit,” says Weiner, “he’s covered if he uses that Nextel material. If his maximum speed is really in the Mach 2 range then adiabatic heating (due to air being compressed in front of him) won’t be a problem. If he starts exceeding space ship re-entry speeds (7 to 10 kilometers per second) he might have some issues with vaporizing in the atmosphere.”