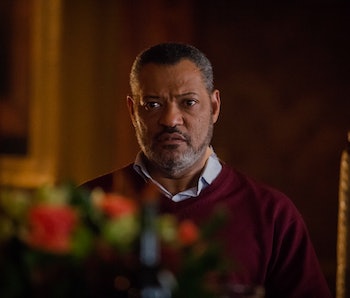 Remember Hannibal, Bryan Fuller’s decadent, mesmerizing, and gruesome television adaptation of everyone’s favorite pun-happy cannibal? If you watched it, there’s a good chance it often comes to mind likely in the dark of the night, as you’re trying to sleep.

Hannibal made waves with its graphic, creative, and abundant murder scenes. The show portrays a whole host of serial killers, and there was nary a boring slasher or sexual predator in the bunch. Yes, all of Hannibal’s serial killers had some twisted and artful endgame for their victim’s corpses. The murders were cinematically gorgeous; the scenes were shot with a slow, almost sensual camera, and the color palette and sheer detail challenged viewers to see the beauty in all the horror. The opening scene of the pilot alone is enough to make you think, “Wait, there’s no way I’m watching NBC right now.” But yes, this next-level shit actually aired on network TV. What a time to be alive.

This guy whom Hannibal grafts onto a tree. Definitely one of the more creative presentations, not all that grisly.

In season 3, Hannibal escapes to Europe but can’t resist leaving a trail of murders to draw Will Graham back to him. At this point in the show, a heart made out of torsos is actually kinda sweet.

This is the first staged murder victim we see in episode 1. It’s pretty shocking, until you see the rest of the show, that is.

The guy who used his victims to grow mushrooms doesn’t seem so bad until you recall that his victims were not dead when he buried them.

In one of the weirdest plot points of Season 3, Will travels to Hannibal’s childhood home, meets this girl, and she kills this guy she has imprisoned in the basement. Will concocts this elaborate design as a message for Hannibal. The sheer randomness makes it more gruesome than it looks.

Abigail’s murder is a bit different since we see it happen on screen and there’s no elaborate staging of the body. But it is by far the most emotionally brutal death on the show.

One season 1 killer turns this musician into an instrument. It’s pretty messed up, and Hannibal clearly digs it. Don’t worry, Will is just imagining that he’s playing this man-cello.

Inspector Pazzi’s murder was, dare I say, derivative. It’s a re-creation of the same death in Anthony Hopkin’s Hannibal, and in turn, a recreation of a historical death of one of Pazzi’s ancestors. But it’s still very grisly.

The human totem pole was just a whole mess of dead bodies. Really.

Poor Dr. Sutcliffe falls victim to Hannibal committing one of his many copycat murders. Seriously, Hannibal copies just about every other killer out there. This one ranks highly because it is straightforward, and straight-up gruesome.

In season 2, someone takes offense to Will Graham being put on trial and decides the judge needs a different kind of justice.

This Season 1 serial killer turned his victims into these freaky guardian angels because he feared death, then offed himself before Will could catch him.

Don’t worry, that guy jammed onto a prehistoric skeleton was a murderer himself, it’s fine. The messed up part is that this one was Will’s doing, right after he was acquitted of all those other murders. We were rooting for you, Will.

And that’s not even touching on all the grisly near murders. Seriously, pretty much every character almost dies at least once.