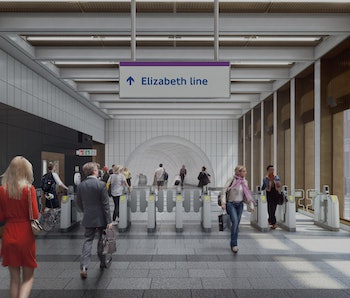 Londoners love their Queen so much that they’re naming a new tube line after her. The Elizabeth Line, the London Underground’s newest route estimated to cost about €15 billion, will connect 42 stations between Central London and the southeast and includes the construction of 10 additional stations in addition to renovations to existing ones. Transport for London will operate the new route that extends more than 60 miles, linking Reading and Heathrow in the west to Shenfield and Abbey wood in the east. The “Lizzie Line” is estimated to carry 200 million passengers a year, shorten travel times, and bring 1.5 million people closer to Central London.

Although service doesn’t begin on the Elizabeth Line for a few years, Crossrail designs has released new renderings of the new stations, all of which are currently on display at the Royal Institute of British Architects. According to Crossrail’s team, each of the new stations will boast a characteristic, innovative design that reflects the history and appearance of its surrounding area.

The new station at Paddington, for example, will draw influence from the existing terminus building to further align with the rail designs of Isambard Kingdom Brunel, one of the most prominent English mechanical and civil engineers from the 19th century. The new Farringdon station will bear similarities to England’s iconic Barbican multi-arts venue and celebrate London’s history steeped in the workings of blacksmiths and goldsmiths.

Currently 75 percent completed, the construction for the Elizabeth line is geared toward making tube travel more convenient and even pleasant. London’s transport commissioner Mike Brown said, “The TfL-run Elizabeth line will transform travel across London, reducing journey times, relieving congestion on the Tube network, and radically improving step-free access with brand new accessible stations.” Notable architecture firms Aedas, Wilkinson Eyre, and John McAslan and partners have collaborated with Crossrail on new designs for the stations, while design studio Barber and Osgerby and Canadian transportation company Bombardier are helming designs for new trains, which span the length of two football fields and can carry up to 1,500 passengers.

The new renderings of Tottenham Court Road, which offer state of the art designs and a beautiful aesthetic, are of particular interest in terms of refreshing and original design. The curved walls and circular ceiling lights contribute a modern flare, while pictures of the new entrance on Dean Street provide a glimpse of the spacious ticketing room that transitions seamlessly into the surrounding city landscape.

It’s not clear which specific architects designed each of the new stations, but the new renderings provide enough context to garner some hype about the construction that began in 2009. Service along the Elizabeth Line is expected to start in December of 2018, and while that date may seem way off in the distance, the new peaks at the station designs should assure Londoners that the new line will be well worth the wait.