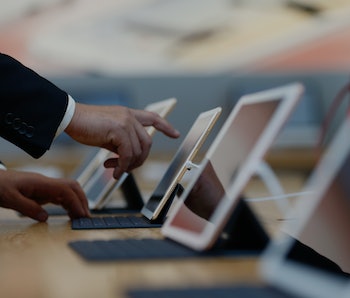 Twelve years ago, Nintendo taught the world that playing games on one screen is kind of lame, and real winners use two screens. The Nintendo DS showed us that buttons are cool, but it’s even cooler to prod at a second screen with a stylus. On Tuesday, it seemed like Apple had finally caught up with the hype, as the U.S. Patent Office awarded the firm a patent for a second screen attaching as a cover to the iPad.

The catchily-titled “cover attachment with flexible display” works a lot like Apple’s Smart Cover that it sells for the iPad Pro. The one on the market is a keyboard that magnetically attaches to three connectors on the longer edge of the tablet. This flexible display would work similarly, except the drawings show four connectors, presumably for the extra data piping through.

This new type of display would even support the Apple Pencil, the new iPad Pro-only stylus that transforms the iPad into a powerful drawing tool. Much like the old Nintendo DS, a user could draw something on the lower screen while keeping the higher screen free to display information.

Apple has a number of ideas up its sleeve, though. The “flexible display” part of the patent could mean a display that folds up like the regular smart cover, split up into sections to only display small amounts of information on each panel. Some panels could even be used for something else entirely, like a solar panel.

A foldable display could mean the second screen wraps around the back, providing simple controls for music playback and the like. Here, Apple seems to be taking inspiration from another popular Japanese handheld games console. Sony’s PlayStation Vita features a touchpad on the back, so players can perform simple touch-based maneuvers without smudging the screen.

The idea is only in the patent stage, but if the DS’s impressive back catalog is anything to go by, there’ll be some great uses for having two screens. Dr Kawashima’s Brain Training set a whole generation onto the idea of recreational math, while Zelda taught us that drawing on maps is really cool. If the patent ever comes to fruition, it could mean a whole new range of innovative iPad apps.