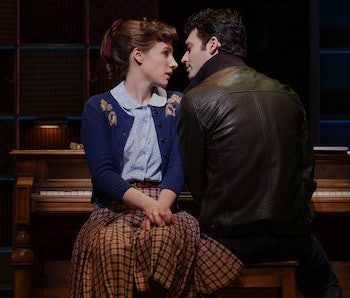 Job: Bosner is a Broadway producer best known for Beautiful: The Carole King Musical, which won a Tony for Best Performance by an Actress in a Leading Role in a Musical and earned a nod for Best Musical.

How did you get into theater producing?

Growing up, I was a very musical child and an avid consumer of [theater]. But I was planning on doing nothing theater-related. I went to the University of Miami because they have a great international financing program. I had aspirations of setting up companies around the world — which funnily enough, I’m now doing.

About a month before I graduated high school, my theater director told me about an internship at Saint Louis University, where there was an opening in the production office. I remember very clearly the moment that changed my life. It was two weeks into that internship where I was at a production meeting for Meet Me In St. Louis. The executive producer Paul Blake was telling us why it had to be on this schedule, not that schedule; this set piece and not that one. It opened my mind to a business world of theater that I never knew existed. So Paul took me under his wing. When I got to school that fall, I was so into this theater thing that I ended up creating a program to do both theater and business, and I kept my internship with the university for the next two years.

Paul ended up scheduling all the work that needed to be done in New York for this theater in St. Louis around my spring breaks and winter breaks so that I could fly in. After my third summer, Paul said his full-time associate producer was leaving — was I interested taking over? I said, “Yes, but I’ve only been in school for three years, how can this be?” He said, “If you can figure it out, the job is yours.”

I graduated early and moved to New York. We continued with me working as his associate producer for another five years. So I was very lucky in that I found a mentor who wanted to guide me through this crazy business. But also when it came time to do the Carole King show, he said, ‘I need a partner’ and gave me that opportunity.

Do you think finding a mentor is key to breaking into the theater world?

Everyone needs a mentor, and I don’t think that’s specific to theater. The New York theater world specifically is so cutthroat on all sides. There’s so many people wanting to do it, and there’s no one way to do it.

Would you say that’s been your most rewarding theater experience so far?

Definitely. We hit it out of the park our first time doing a show here. The funny thing about Paul and my partnership is I just turned 30 and he’s in his 70’s. It’s been a magical experience. I’m now setting up foreign companies of the show. We have one on Broadway and a national tour that’s traveling around the United States. We have a company in London right now, and we’re figuring out deals for about 10 other cities.

Is 30 unusually young to be a Broadway producer?

I’m on the younger side of people that are producing — but the producing field has changed dramatically as the cost of shows become greater.

What excites you the most about the direction Broadway is going in?

The diversity in Hamilton is really special. It’s important that we’re showing not only actors but creators from all walks of life. The theater should be representative of a generation and the people living in it. That’s what happened with Shakespeare. He wrote plays about the people, and that’s a really exciting thing.

You mentioned how ticket prices are going up but theater should be for everyone. How do you reconcile those things?

That’s tough. Every show is different not only in terms of content but in terms of business. A lot is depended on where your show is playing, meaning what theater. When we were looking to put on Beautiful, we looked at all different types and sizes of theaters. We ended up in a smaller house. That was a strategic decision, and because of that we played on the supply and demand game when we were really hot in our first year. A lot of shows include that even when they’re at their hottest — they make sure to maintain a price point for the people and there are $10 lottery tickets and student rush tickets. So there are a lot of ways to make them accessible. It just takes a conscientious person at the top to make sure they are always making tickets available at affordable prices.

What’s the most challenging part of your job?

This business of ours has been steeped with certain advertising principles. We do traditional advertising in The New York Times and in print and billboards, but there’s been a big shift over the last few years about how you can use the internet.

And what about on a daily basis?

I feel like what people don’t know about theater producing is that it’s very entrepreneurial. At the end of the day, we’re really running a business. Especially a show of our nature, which is in its third year of Broadway and in its second year in London and a national tour. You’re running a company — we have about 500 employees worldwide. A lot of it is just staying on top of everyone to make sure the strategies are being implemented correctly, and at the same time protecting the show.

What do you mean by ‘protecting the show’?

Protecting the artistic vision. We developed Beautiful a good five years before it appeared before an audience that paid money to see it. So it is our job and the job of our artistic staff to maintain the artistic integrity of what you’re seeing. Jessie Mueller won the Tony award for playing the girl in our show, and it’s our job to make sure that every night they’re seeing a Tony award-winning performance even though Jessie has long since left the show. I’m very proud of the fact that all of the girls who have played the show around the world now are giving a very special, unique performance.

When a show like Hamilton comes along — a show that dominates the cultural conversation — is that a good thing for other plays, or is it frustrating?

There’s nothing better for all of Broadway when a show like Hamilton comes in and is completely revolutionary and shines such a spotlight on Broadway. Hamilton is a major triumph both in terms of music and the artistry of it. It brings more attention to the other shows and is ultimately a good thing for everybody.

What are you most excited about in the immediate future?

We’re in the midst of our Tony season right now. We wait until all the shows are open to see them because we only think it’s fair to give everyone a chance to do their work. But our next show is going to be a musical version of the movie Roman Holiday, which we’re very excited about. That’s going to be premiering in San Francisco a year from now, and hopefully coming to Broadway in the fall of 2017.

Do you have a dream play you’d want to work on?

At the moment, no. I’m in a very fortunate position of having to maintain a successful show that I’m really proud of. I’m open to all ideas of shapes and sizes, different playwrights and composers — so there’s not one thing I have my eye on. I’m looking all over the place and trying to find talent I’m interested in working with, and pairing those people up with people who are also like-minded in their talent.