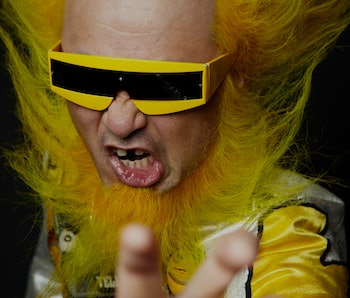 Biographical musical documentaries are often predictable, even the good ones. How many scrappy bands play in college basements before they go primetime and burn out into has-beens? How many punk bands play their hearts out for a hardcore few before the world passes them by? Jonathan Yi and Michael Haertlein kept that in mind when they made the new documentary Mad Tiger, doing their best to avoid rock doc pitfalls when the chronicling Japanese punk band Peelander-Z and the civil war between its two founders.

“It was challenging to try to make a film that right away explains [it] is not about music,” Yi said in an interview with Inverse. “We wanted to show a story about two best friends and the music aspect of it is a key part, but we try right away that music [isn’t] the focus.”

Yi and Haertlein’s landed on the perfect subject for their unconventional film, Mad Tiger: the band Peelander-Z, the cult Japanese punk band known for their wild Super Sentai-inspired identities, skate video stage antics, and a strict safeguard over their personal lives (they go by names of colors). Though all the world’s a stage for Peelander-Z, the filmmakers accessed closed doors when founding member and bassist, Red (real name Kotaro Tsukada) retires, setting the tone for an emotional U.S. tour in the fall of 2012. Frustrated frontman Yellow (Kengo Hioki) struggles to find a suitable replacement while his hyper-positive persona cracks under feelings of betrayal and abandonment.

Following last week’s premiere at the IFC Theater in New York, Mad Tiger is embarking on a multi-city tour before it’s available via Film Movement on July 12. Yi and Haertlein spoke to Inverse about working through uncomfortable moments to achieve emotional truth and the importance of earning trust between documentarian and subject.

What’s the origin of Mad Tiger? Who approached whom? Did you know Green was also going to leave after Red?

Yi: The film started when Red announced he was going to leave the band. I’ve known the band for years, directing some of their music videos. And when they posted that video, it was clear there was an intense story. If you watch the YouTube clip, Red is telling this ridiculous story of how he’s leaving, but behind those goggles you can see there’s intense emotion.

So I called Michael when that video came out, and we decided it would be worth making a short documentary about Red’s last days in the band he’s been in since he was a teenager. Originally that was the focus. But once we started, Hisayo Kushida, our editor, watched the footage and urged us to change our focus to Yellow. Because Yellow was going through much more of an upheaval than Red. And no, we did not know Green was going to leave, that was a surprise.

Right from the beginning there was so much tension from the band to talk openly on camera, even saying if it’s “okay with Yellow.” How did you get them to open up?

Haertlein: This the band’s first time filmed and photographed not in their costumes, so this is a new experience entirely for people other than Yellow to speak, to have where they live and real lives filmed. I think everybody was uncomfortable, but it was just a big step they felt they were ready to take.

You shot a lot of intimate moments of a band known for keeping their real lives to themselves. I refer to the heated argument between Red and Yellow in the hallway: As documentarians, how did you earn that trust?

Haertlein: Building trust took time. We’ve known the band for years before we started filming, and just having them allow us into their world was a big step. But it did take a few months filming for them to start forgetting cameras are there. They spend years performing, and when there’s cameras they were always performing. We showed up regularly until they got exhausted from the pretending. I think they started living their normal life and forgot we were there over time.

After Yellow and Red butt heads, Yellow asks you not to use that. You used that. What led to that decision and how did you arrive at that?

Haertlein: We tried to address those questions in the moment, so whenever you hear him say “Don’t use this,” that was time we engaged that question. After the fight Red and Yellow had in the bar, there’s a moment in the van that’s in the movie of him talking to himself about the whole thing, and that’s where we had a big discussion. [We] didn’t want there to be any surprises [between us]. We were definitely making ourselves clear as far as what we intended to do and what the purpose was of the whole thing. That is something we did not hide, and we definitely tried to be up front about everything.

Several times you guys can be heard, but we never see you. How did you decide when to “appear” and when to “disappear”?

Yi: We never wanted to be in the film but our editor, Hisayo, started including those moments because she felt that was the strongest way to tell the story. We were convinced she was correct. There’s a lot of choices our editor was able to convince us that is a stronger way of having our message go forward. For example, there’s a scene where Red is changing his bass cab from red to purple. He was doing that alone and Purple came in to help. We were trying to shoot around Purple a little because it was kind of disturbing the vibe. But in the final edit Hisayo decided to include them together, because they both signed the back of the cabinet and that was the emotional point.

You said you wanted this documentary to be about best friends and their friendship, not about a band and their music. Do you think you’re losing fans who want to see a “music documentary”?

Yi: Michael and I are avid, passionate music fans. But as passionate fans, we are also narrow in terms of taste and I understand that. I want as many people and Michael wants as many people to see this film as possible. It’s a human story relatable beyond what’s it like to be in a punk band. That’s an element for sure, but we’re trying to make a film our parents could even watch and relate to. That’s not about how you should love the obscure band Michael and I happened to like. I watch a lot of those documentaries too, about bands I love, and I like those documentaries regardless of whether they are well made or not. Our aim was to tell Peelander-Z’s to the broadest audience we could.

You were friends with the band before the movie. How did your relationship change after?

Yi: Totally different. Just because you directed [their] videos and hang with them, you think you’re friends but it’s a totally different experience when you go through this experience together. They’re Japanese, I’m half-Japanese and it’s a very Japanese dynamic. Whenever I was there [with] Michael, we were treated as guests and Japanese people are very hospitable. Always their best face forward. After months of filming we are now in that “family” category, and they’re no longer hiding their true feelings from you, so they act like themselves.

Haertlein: When you get closer to somebody, it also brings baggage of conflict. The closer we got with Yellow and everybody, the more I think [we] felt comfortable offering resistance as well. There were some challenges in trying to break those barriers, but there’s no question it helped us get to [the] heart of the story. We are grateful that despite whatever resisting they felt personally, everybody was on board and participated entirely.

Jonathan Yi and Michael Haertlein’s Mad Tiger will screen on May 13 in Seattle and Philadelphia before ending its run in Fargo, North Dakokta on June 9. The film will be available via Film Movement on July 12. This interview was edited for brevity and clarity.