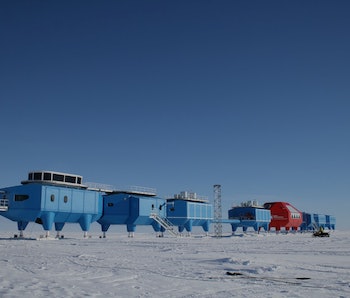 The British Antarctic Survey’s iconic Halley VI research station is on the move. Actually, its always on the move — the ice shelf it sits on creeps towards the ocean at a rate of about a quarter of a mile per year. Antarctica’s ice sheets are in a constant state of change — they crevasse, they flow, they calve off into icebergs. That’s a problem for scientific research stations, which also have to contend with several feet of annual accumulated snow that can bury and ultimately crush a man-made structure.

Halley VI was designed to be permanent, which, on an ice shelf, means it was designed to move. It’s a modular facility that looks like a caterpillar or train, and it can be disassembled and dragged to a new location. The hope has always been that it will outlast its predecessors, five research stations — some of them just wooden huts in tin cans — that collectively survived just 56 years before destroyed by the elements.

The station officially opened in 2013 and the plan was, at that time, for it to stay put longer than three years. But a creeping crevasse called Chasm 1 has the team worried enough to start packing up and moving on to a safer location. Chasm 1 formed 30 years ago, but was stable until 2012 when it began to grow. It’s now moving at a rate of one mile per year towards Halley VI, which is about five miles away.

The problem is both the crevasse and the events it catalyzes. If crevasse creep were to cause a major calving event, the research station would end up out to sea on an enormous iceberg. If the crack grew long and wide enough to cut off Halley from the rest of the shelf, making a future move would become impossible.

Fortunately, the research station is designed for the relocation. Besides coming apart into sections, each module sits on hydraulic lifts, which help keep the structure above accumulating snow. On the bottom of the lifts are skis, to allow for the dragging of each module across the barren landscape.

Architect Hugh Broughton came up with the design, which has won multiple awards. In addition to mobility, the pods have been outfitted to keep the 16 over-wintering staff relatively comfortable and sane through eight months of total isolation and 3.5 months of total darkness. During the short summer season, the population jumps as high as 70, as scientists flock in for field work, rushing to get it all done in the 24-hour daylight.

More like this
Innovation
Sep. 21, 2022
Look: Drones could be the future of 3D-printed architecture
By Jennifer Walter
Innovation
19 hours ago
Horrifying: Robots may have just gained a creepy new skill
By Molly Glick
Innovation
9 hours ago
Scientists have created a mechanical womb that can grow life in the lab
By Miriam Fauzia
Share: