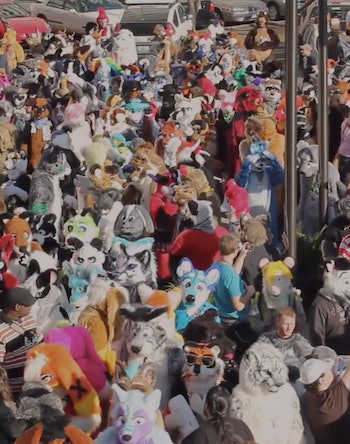 Documentary director Dominic Rodriguez did not know he was a furry until he was partially finished with his incredible film, Fursonas. “Whenever I talk to a person who says ‘I think I kinda like this scene or this film, but I’m not, you know, a furry,’ I know that they are. All it takes is just a little bit of interest. It’s a slippery slope because it’s such a fun community.”

Inverse spoke with Rodriguez over the phone after previewing Fursonas, which premiered at Slamdance in January, and is currently available for pre-order on iTunes. Though the average viewer may watch Fursonas expecting shocking depictions of alternate sexuality, that misconception is a product of sensationalist media.

The most shocking thing about Fursonas is its frank depiction of the insidious and vitriolic rhetoric used by some furries, particularly a leader who goes by Uncle Kage. Kage refused to be interviewed for Fursonas unless he was given, as Rodriguez reports in the film, a “near-editorial level of control.” Kage’s voice, however, reverberates violently through the documentary, through footage taken at Anthrocon, the largest gathering of furries in the world, which Kage himself oversees.

During the film, Kage threatens to take disobedient furries “out back and skull-fuck them,” and he calls one female furry, who appeared on The Tyra Banks Show in order to describe her experience with the fandom, “a fucking bitch.” It’s unclear in Rodriguez’s documentary how Uncle Kage rose to power among American furries. When he’s depicted as an animated humanoid, the way each of the film’s subjects are rendered (quite lovingly), Kage is a cockroach standing on his hind legs, wearing a white lab coat and holding a glass of wine.

On Victimization and Bullying

Fursonas does a satisfying job of exploring what’s causing the furry community’s inner turmoil. Many of the film’s subjects blame the media for inconsistent, or even damning, portrayals of their culture, but the real problem for furries seems to be their aggression, which is borne out of panic. In one regard, Kage has a point. He tells Anthrocon, “we are the fat kid, we are the kid picked last in gym class.” Though many furries, including those highlighted in Fursonas, are classically attractive, talented, and “normal” looking people, they’re each marked by a lifetime of turbulent growth and introspection.

“Out of hundreds of people we asked to interview for the film, there was maybe one guy who said ‘how did you get this information?’” Rodriguez tells Inverse. “Your typical furry probably doesn’t want to talk to the media, so the people who engaged with us, in a weird paradox, aren’t the most representative of the group as a whole. I got quite a few saying ‘sorry, not interested, don’t want to be on camera’.” Many furries have been socially and systematically victimized, and they act out against this stigma, sometimes succumbing to threatening each other, and members of the media.

Positivity is what makes Fursona such a revelatory watch for non-furries. Aside from Uncle Kage, the subjects of the documentary are sensitive, effervescent, and charming. Rodriguez did a fantastic job casting a wide net, highlighting a woman who balances being a furry with being a mother, and Varka, one of the furries who owns the famous furry sex toy company, Bad Dragon. That both sections of the film are equally engaging is a testament to both Rodriguez’s storytelling, and the transcendent humanity in the furry community. Whether a furry’s interests are childlike, or decidedly erotic, each member of the fandom comes off strikingly genuine when interviewed by Rodriguez.

Somewhere around the documentary’s halfway point, I realized that I had begun anticipating the reveal of each human subject’s animated “fursona”. As a passive viewer of the film, I had accepted that each subject’s image wasn’t complete until a shot of his or her face cut to a quiet shot of an animated, anthropomorphic animal.

When the child and mother (Freya), pictured above first appeared on screen, they were heartbreakingly dancing together in their backyard, seemingly only aware of each other. Seeing their animated portrait, which flickered onscreen shortly after that establishing shot, made me exhale; here was the way the mother and daughter imagined themselves. Rodriguez and his artists had found a way to show us a furry mother’s soul, the feminine, maternal, humanoid animal she saw in the mirror.

One of the most engaging scenes in the documentary features a “mated” couple of furries, Quad and Grix, who dialogue jovially with an offscreen Rodriguez while smoking weed and playing video games. Among all of Rodriguez’s subjects, Quad and Grix are most obviously embodiments of their animation’s personality.

“You wanna know my theory as to why there was a furry uprising during the late 90s, early 2000s?” one asks, and the other nods, smiling softly. They explain that The Lion King, a film often cited by furries as inspirational, came out in 1993, and at the turn of the millennium, many of the fans who grew up with anthropomorphic children’s films were suddenly communicating using the internet.

It’s heartwarming to see the two men, obviously very much in love, glance sideways at each other when making a controversial point regarding Uncle Kage or the strict, prude social taboos enforced by the folks at Anthrocon. Drugs, too, Quad and Grix admit, are a great way to discern a chill, accepting furry from an unreasonable one.

Just before the film introduces Bad Dragon, a polarizing subject among furries, Rodriguez includes several clips of now-familiar furry faces smiling when confronted with the company’s name. “Yes, I know Bad Dragon,” says one woman. “We … we have many of their toys.”

Fursonas is a fantastic learning tool for non-furries curious about the subculture, at once downplaying any sensationalism surrounding furry sexuality and allowing many furry subjects to comment on Uncle Kage’s strange reign.

Even more polarizing than Bad Dragon is a particularly infamous furry, Boomer the Dog, who famously tried to change his legal name to his furry name, publicizing the furry community in a sudden way many members found startling. Fursonas overlays Uncle Kage’s hateful and condescending speech about Boomer the Dog, in which he calls him “certifiably insane”, “a nutcase” and says (while the camera focuses on the frankly sweet Boomer making a snowman), “I have no idea what’s going on in his mind, and I’m terrified to find out.”

A chorus of laughter follows the audio clip, and it’s revealed that, of course, Boomer is actually making himself a snow dog. A car drives by Boomer, alone in the snow, and honks in a friendly gesture. Boomer turns, waves happily, and continues shaping his snow dog’s snout. The film ends on that quiet moment, leaving its viewers feeling not only accepting of furries, but fiercely protective of the kindest and most gentle members of the fandom.