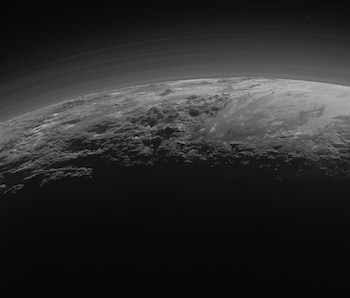 Thanks to the New Horizons probe of Pluto, we know it has an incredible atmosphere. It’s a gorgeous thing to behold, but scientists have never been able to figure out exactly what’s causing its strange haze.

The newest theory holds that Pluto’s atmosphere might be a side-effect of gravity waves.

Before your mind explodes in awesomeness, let’s get one things straight: we’re not talking about gravitational waves like the ones discovered in March. Gravitational waves, if you don’t know by now, are ripples in spacetime caused by very high-energy events like two black holes crashing into one-another.

Gravity waves, on the other hand, are not cosmological in nature, but rather a physical phenomenon that causes a buoyancy in atmospheric particles. They are also characterized by a rippling effect, but they’re an actual force that acts on a fluid. They spread out and permeate throughout a given system.

At the March meeting of the Lunar and Planetary Science in Texas, the principle investigator for New Horizons, Alan Stern, told the audience, “there’s now a growing consensus on our team that the structures you see, that horizontal banding or layering, is formed by gravity waves.”

On Pluto, Stern and his colleagues have discovered that ice will transform directly into gas and vice versa without turning into a liquid first. This phenomena causes buoyancy forces that push against the atmosphere.

“Any disturbance in the atmosphere can generate gravity waves, such as wind blowing over mountains, [and] evolving weather systems,” Darrell Strobel, an atmospheric scientist and a New Horizons team member, told Space.com. Those waves, Strobel thinks, propagate through the atmosphere and cause it to move such that it produces a hazy effect from far away.

Of course, Pluto isn’t the only world to be a host to gravity waves in its atmosphere. We see these buoyancy effects on Earth sometimes when there’s intense heating caused by volcanic activity and aberrant weather. Saturn’s moon Titan and Neptune’s moon Triton also exhibit gravity waves. What makes the Pluto findings special, however, is the fact that pretty much a year ago, we had no clue the little dwarf planet even had an atmosphere — let alone a hazy one.

As the data continues to be analyzed, we’re learning more and more that the former ninth planet is more vibrant than we ever thought.

More like this
Science
23 hours ago
A new plasma-based technology could be crucial for living on Mars
By Doris Elín Urrutia
Science
2 hours ago
5 years ago, scientists observed a new kind of cosmic explosion
By Allie Hutchison
Science
8.15.2022 11:00 AM
South Korea just launched a rocket to orbit the Moon, a first for the country
By Nancy Atkinson and Universe Today
Related Tags
Share: