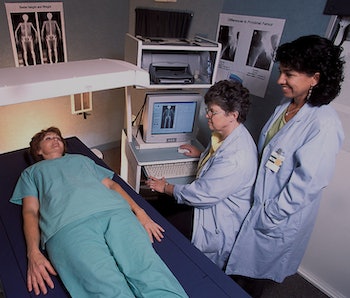 Google’s DeepMind artificial intelligence system has gained access to the health records of 1.6 million British patients in one of the largest data-sharing agreements of its kind. The London-based Royal Free NHS trust is providing the records and including full names of all patients over the last five years to help the A.I. program build an app that assesses an individual’s risk for kidney failure.

“This work focuses on acute kidney injuries that contribute to 40,000 deaths a year in the UK, many of which are preventable,” Dominic King, a senior scientist at Google DeepMind told the BBC.

The Google-developed app to aid hospital staff has been in development since February, but the data-sharing agreement suggests the DeepMind system did not yet have access to enough data to make clear assessments. The huge trove of information, though, raises questions about whether Google is planning to do more than just study kidney failure. The tremendous economic value of being able to make strong medical predictions suggests that Google is looking to build its database — to strengthen its predictive ability on multiple fronts.

A Google spokesperson told BBC that the wide range of data is necessary to create a complete picture of what determines risks for kidney failure. Yet the difficulty of opting out of the data sharing agreement for skeptical patients as well as the strangely limited aims of the project have left some privacy advocates frustrated.

“This is not just about kidney function. They’re getting the full data,” Sam Smith, of the health data privacy group MedConfidential,” told the New Scientist. “What DeepMind is trying to do is build a generic algorithm that can do this for anything – anything you can do a test for. The big question is why they want it.”

Representatives of Royal Free NHS Trust, though, insist that they follow all privacy protocols in making the arrangement. The data will also be provided to Google completely encrypted, so no individual on the DeepMind team will be able to learn about any individual patient.

“As with all information sharing agreements with non-NHS organizations, patients can opt out of any data-sharing system by contacting the trust’s data protection officer,” a spokesperson told The Guardian.

If the A.I. program is successful at reducing kidney failure deaths in the hospitals, it would nonetheless make DeepMind’s victory at the game of Go look like little league compared to the transformative potential of tech in the medical sector. We aren’t talking about piping WebMD into the ear of every doctor so they are as freaked out about every little symptom. A.I. is about unifying the knowledge of doctors and patients around the world into a system of incredible predictive ability.

DeepMind’s A.I. could learn to predict heart attacks, strokes, and even cancer. It may seem like a dream, but with new programs providing access to new information about an individual’s condition at all times, these computers may be able to track small irregularities over long periods of time to make pretty good guesses about overall health risk. Imagine how recording the millions of blood tests for diabetes could change what we know about the risks associated with glucose levels.

As long as all that information is going in the garbage, we’re missing an opportunity, and Google is trying to fix that.

More like this
Innovation
Jan. 19, 2023
A robot choreographer reveals why M3GAN — and all robots — should dance
By Molly Glick
Science
Jan. 21, 2023
Plague study complicates a commonly held belief about the Black Death
By Samuel Cohn, Philip Slavin and The Conversation
Science
Jan. 21, 2023
A deadly fungal plague swept the world of The Last of Us — is it realistic?
By Tara Yarlagadda
LEARN SOMETHING NEW EVERY DAY.
Related Tags
Share: