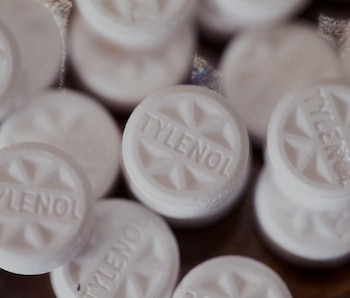 Tylenol is the world’s most boring drug. You take it and, if all goes well, half an hour later your headache is a little bit less headachy. The active ingredient, acetaminophen, has been around since the 1870s and has been a wildly popular medication for pain and fever for several decades.

But you already knew all that. What you might not know is the rest of the story. In recent years, new research has proven that acetaminophen has all kinds of unanticipated effects on our moods, perception of the world, and even behavior. Several studies show that Tylenol dulls emotions as well as physical pain and in one experiment people responded to social rejection less acutely if they were taking the painkiller. Other research has shown that acetaminophen makes it easier to contemplate death and face difficult decisions.

Still, there’s no such thing as a panacea. One study found that Tylenol dampens our response to all emotionally charged content, whether positive or negative. And there’s evidence that the drug affects how we act as well. One research team found that acetaminophen dampens our brain’s ability to detect errors and react appropriately. This could make it harder to say, avoid a swerving car if you’re talking on the phone while crossing the street, one of the scientists involved in the study explained. (It’s also easier to die from a Tylenol overdose than you think — but that’s a different story.)

It sort of makes intuitive sense that a drug that interrupts our brain’s ability to perceive physical pain might interrupt emotional pain too. How is it possible that we could know so little about the effects of a drug that is so common and so accessible?

A lot of the answer is in the design of the pharmaceutical system. Drug regulators ultimately have to answer two questions:

Acetaminophen is likely far from the only drug that has off-label psychoactive effects. Our bodies and our brains, after all, are not discrete systems. “One has to wonder, are these drugs that people are taking for a variety of different reasons having brain effects? There might be more widespread psychological and behavioral effects than we currently appreciate,” researcher Baldwin Way tells Time.

This is not to say that you should stop taking Tylenol for headaches — or start taking it for heartaches — but it’s an interesting case study in the amazing, complicated system that links our bodies, our brains, and our behavior. Everything you ingest has the potential to affect this system in ways that are, if not beyond our understanding, largely not well understood.