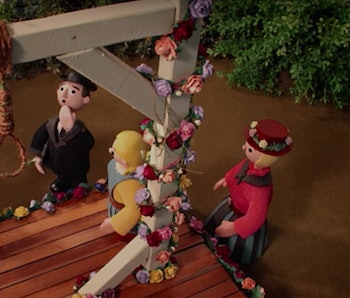 Radiohead has spent the last week or so deleting its entire internet presence, giving further credence to the notion that a new album or new music is happening soon. Today, the band uploaded a group of teaser trailers, as well as a new music video for a single called “Burn the Witch.”

The video itself contains some signature Radiohead cheekiness; it’s mocked up to look like a more sinister version of Davey & Goliath, where a group of townspeople join arms to burn a giant effigy. (Also, a woman is tied to a tree, a noose is inspected, and so forth). A B-side that fans have called “Burn the Witch” has existed for years, and this does indeed sounds like a revamped version of that song, not unlike how the band completely rebuilt “Reckoner” for their album In Rainbows. Watch the entire clip below and check out the other teaser-Instas the band posted. It is unknown whether “Spectre,” the song the band recorded for the Bond film of the same name, will appear on this new recording.