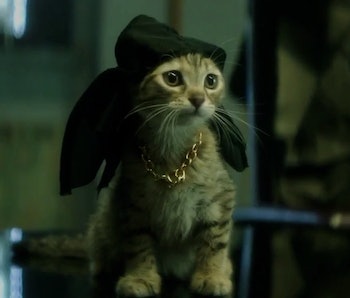 Keanu, the big-screen debut of comedy duo Key and Peele, got off to a strong start in its box office opening weekend. The action-comedy, starring a kitten that lands itself in trouble with organized crime, grossed an estimated $9.35 million, beating out other newcomers Mother’s Day ($8.3 million) and Ratchet & Clank ($4.82 million).

It’s been something of a perfect storm for Key and Peele. The duo have captialized on a genre popular in the ‘80s and ‘90s, but had somewhat waned in recent years. While 1997’s Men in Black remains the highest grossing film in the genre, a gap in the market grew over the years as studios moved towards a Judd Apatow/Seth Rogan brand of comedy instead. If Keanu is a success, it could yield a resurgence in the action-comedy genre.

The film cost just $15 million to make, according to the Hollywood Reporter, and critics love it. The film currently holds a 75 percent rating on Rotten Tomatoes.

But the film was no match for The Jungle Book. The reinterpretation of Rudyard Kipling’s classic work held on to the overall top spot with a staggering $42.4 million. Critics have given the film rave reviews, receiving a 94 percent rating on Rotten Tomatoes. Since its release on April 15, the film has grossed nearly $685 million worldwide.

The Huntsman: Winter’s War beat Keanu into third place, grossing $9.39 million but still falling short of expectations. The fantasy film is a sequel to Snow White and the Huntsman and holds a 16 percent rating on Rotten Tomatoes. “The Huntsman: Winter’s War is visually arresting and boasts a stellar cast, but neither are enough to recommend this entirely unnecessary sequel,” the critical consensus read.