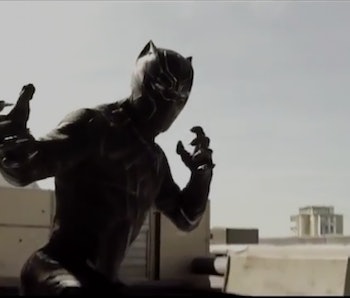 Fans are buzzing about the airport fight scene in Captain America: Civil War. In this sequence, Marvel introduces the latest iteration of a new youthful Spider Man. But, there are some other action packed fight scenes to get excited about as well.

Marvel fans only have another week to wait before the movie’s weekend release, but scenes are starting to come out ahead of time. One of them is a rooftop fight scene between Black Panther and the main villain, the Winter Soldier, a.k.a. Bucky.

This marks the first time fans have seen Chadwick Boseman’s character Black Panther in full costume and it’s pretty claw grabbingly awesome. Black Panther in this scene is looking to take down the Winter Soldier (Sebastian Stan) because he believes the villain blew up the UN meeting.

The two duke it out with Bucky in street cloths and Black Panther scratching at him with his metallic claws. Captain America gets into the fight when he spots the two from another building and makes a tumbling leap across to meet them. Unfortunately, the short 37-second clip cuts off before the Captain can throw any punches.

Many of the shots in the Captain America movies have been large, over-sized battles between a ton of huge characters. This scene suggests there’s room for some one-on-one fist fights that show off some of that intricate super hero fighting — and plays with shorter closeup shots.

Of course, fans will get that climactic huge fight scene at the end between the now splintered group of heroes. But, it’s also nice to focus in on a scene and not always pull the camera back to see the bigger picture.

Iron Man and Captain America are going head to head in this one after a disagreement strains their normally cordial relationship from The Avengers. Black Panther is acting as a sort of third party by not taking either side.

If early reviews are any indication, this movie will be a winner.

More like this
Entertainment
Jan. 17, 2023
Guardians of the Galaxy 3's Adam Warlock reveal may be a big misdirect
By Eric Francisco
Entertainment
Jan. 15, 2023
3 ways Marvel Phase 5 can fix the MCU’s biggest problems
By Dais Johnston
Entertainment
8 hours ago
Where and how to watch the 2023 Oscar nominees
By Mónica Marie Zorrilla
LEARN SOMETHING NEW EVERY DAY.
Share: