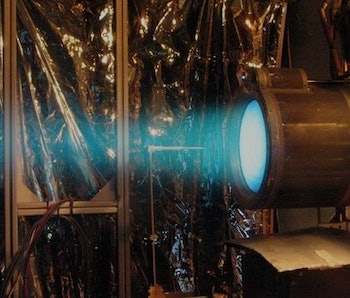 The simplest way to explain the space exploration benefit of an ion thruster over a rocket is to compare them in simple “Tortoise and the Hare” style: The faster of the two – in this case, the rocket – doesn’t always win the race.

“The hare is a chemical propulsion system and a mission where you might fire the main engine for 30 minutes or an hour and then for most of the mission you coast,” Michael Patterson, senior technologist for NASA’s In-Space Propulsion Technologies Program, tells Inverse. “With electric propulsion, it’s like the tortoise, in that you go very slow in the initial spacecraft velocity but you continuously thrust over a very long duration — many thousands of hours — and then the spacecraft ends up picking up a very large delta to velocity.”

Ion thrusters will be used in the European Space Agency’s (ESA) mission to Mercury. The BepiColombo (perhaps the most British sounding spacecraft to date) will launch in 2017, fly by Venus in 2019 and 2020, and be captured by Mercury’s gravity in 2024.

The spacecraft will use specially designed T6 ion thrusters that will allow the ESA to study our galaxy’s innermost planet over a mission duration of nearly seven years. Two orbiters from the ESA and the Japanese Space Agency (JAXA) deployed by BepiColombo will also be able to analyze the surface of the planet for one Earth year.

The logistics of the lengthy trip would not be possible without ion thruster technology, which Patterson has been developing for years as the design engineer for NASA’s Deep Space 1 Dawn mission and the principle investigator on NASA’s Evolutionary Xenon Thruster (NEXT) propulsion system. He says the tech offers much higher fuel efficiency, the ability to go on longer missions (like the one being undertaken by BepiColombo), and a less cost prohibitive take-off procedure. Currently, he says, 50 percent of a rocket’s mass is dedicated to chemical propellants.

“[With typical rocket thrusters] you’re spending half of your launch vehicle (mass) just to put propellent in space to be able to push whatever it is you want to push to the next location,” says Patterson. “By eliminating that chemical propulsion system aboard the spacecraft and putting in electric propulsion, you can change that number down dramatically to maybe 10, 15, or 20 percent of the overall mass.”

Gridded electrostatic ion thrusters, like the T6, utilize xenon gas as a propellant. ESA propulsion engineer Neil Wallace said in a release that, assuming the “same mass of propellant,” T6 thrusters can even accelerate to a speed “15 times greater than a conventional chemical thruster.”

Coming up with cost efficient ways to launch rockets has, of course, been the focus of SpaceX, as the Elon Musk-founded company recently demonstrated it could reuse rockets and land them on drones in the ocean.

However, ion propulsion, which will be a boon to space exploration fuel costs, has progressed at “glacial” speeds, Patterson points out.

“The application rate of the technology by NASA and by the European Space Agency is at a pretty low pace,” he says. “If we’re talking about consumer electronics, between concept and application, it takes nine to 12 months. The next ion propulsion systems, which are replacing the engines I built and tested 15 years ago this month; we’re talking about the earliest application of it happening in 2021.”

NASA, this week, did award the California-based company Aerojet Rocketdyne a $67 million, 36-month contract to develop solar powered ion engines, which could extend mission life even longer than the highly efficient fuel powered ion engines aboard the BepiColombo.

For now, the T6 ion thrusters powering EAS’s BepiColombo trip, along with some help from solar-electric and chemical propellant thrusters, will be resourceful enough to steer the spacecraft for the entire seven-year mission, whereas scientists, in the past, have had to to rely on the slingshot method using a planet’s gravitational pull — The Martian style.

EAS’s mission is fast approaching and the agency just completed testing of the new T6 thrusters, which are the larger brother to the T5, this week. Patterson says NASA will also implement several ion-thruster based missions in the 2020s.

Patterson says NASA has already done orbital surveillance of all the “relatively easy” objects with chemical propulsion, but it will need ion systems to get to the higher value targets, such as smaller, farther reaching moons and asteroids that are harder to orbit without the steady corrective abilities of an ion thruster.

“Now, you’re getting to more interesting science like entering the orbits of the moons of Saturn or Jupiter or Mars and doing intriguing science where there’s potential for testing life elsewhere,” Patterson says. “Those are scientifically high value objectives but they are really hard to do from a propulsion standpoint.”

More like this
Science
10 hours ago
Lucy mission: NASA goals, mission updates, and Beatles Easter eggs
By Passant Rabie, John Wenz and Doris Elín Urrutia
Science
Jan. 25, 2023
NASA and DARPA want to build a nuclear-powered spaceship
By Kiona Smith
Science
Jan. 15, 2023
Can we suck the water out of asteroids? New research may solve one obstacle
By Universe Today and Andy Tomaswick
LEARN SOMETHING NEW EVERY DAY.
Share: