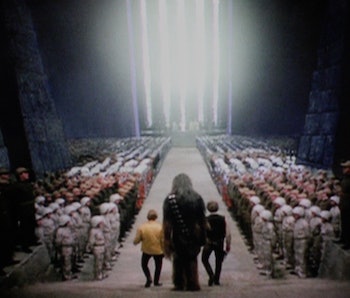 When Harrison Ellenshaw graduated college, he had no intention of following in the footsteps of his father, celebrated artist, production designer and visual effects pioneer Peter Ellenshaw. Fate had other plans, though.

In 1970, after serving three years as an ensign in the Navy, Ellenshaw took a six-month gig in Disney’s Matte Department. Although it was meant to be a temporary position, Ellenshaw worked under legendary head of the department, Alan Maley.

“Alan was a great mentor,” says Ellenshaw. “He was a wonderful artist, he loved film and at the end of six months, I was certainly hooked.”

The rest, you might say, is history. Those six months led to a lifelong career of paintings, scenes, and films that have changed and shaped popular culture. Through Disney’s Matte Department, Industrial Light & Magic (ILM) and Buena Vista Visual Effects (BVVE), Ellenshaw worked on Star Wars: Episode IV - A New Hope and Episode V - The Empire Strikes Back, Tron (1982), The Black Hole (1979), Dick Tracy and dozens of others.

Through roles in matte painting and visual effects, Ellenshaw had a hand in bringing to life some of cinema’s most memorable stories. But what does a matte painter do, and how does painting fit into the wider realm of visual effects?

What Is Matte Painting?

Simply put, matte painting is a technique that involves building a shot with a composite of painted and live-action elements. Before computers and CGI, filmmakers made clever use of painting to build vast worlds on film, and painting continues to be a part of film today, albeit in a very different way.

Before computers gave artists the ability to create 3D worlds digitally, filmmakers used large painted scenes that could be combined with live-action sequences to create shots that couldn’t be captured in real life or on sound stages. Often, these were big, complex shots — think Mary Poppins floating above the streets of London or the large cityscape in Dick Tracy.

Using painted scenes to supplement live action and sets, filmmakers have been able to transport audiences to impossible places and build worlds that have become a permanent part of our cultural consciousness.

Though the process has changed with our ability to build worlds digitally, the purpose and the concept of matte painting remains unchanged. Matte painters are still creating, supplementing, and transforming scenes, even if the tools have changed.

Ellenshaw learned much of the craft from his mentor, Alan Maley, who learned from Harrison Ellenshaw’s father, Peter Ellenshaw, who learned from his step-father, Walter Percy Day — a matte painter, but also one of the first to hold the title of “head of special effects” on a film.

Day wasn’t just a matte artist. He did a number of things in the realm of visual effects, from photography to building miniatures. His job didn’t end with painting. He did what he could to make the film great, and he passed that philosophy on to Peter Ellenshaw.

“Sometimes he would cringe when they would say, ‘he’s just a matte artist.’ My father did everything,” says Harrison Ellenshaw. “He did production design, he did second unit directing, he would do main title backgrounds, hed do whatever it took.”

That willingness to be a part of the team, to get involved where he could, served him particularly well at Disney.

“Walt Disney had the philosophy, unlike most of the major studios, that everybody gets involved, everybody can contribute, and let’s do this as a team,” says Ellenshaw.

This deeply collaborative approach to filmmaking did cause a stir, though, particularly with union rules, which were so restrictive that they dictated the size of paintbrushes artists with different titles and duties were allowed to use.

Even so, the philosophy is one that would stick with Harrison Ellenshaw throughout his career.

“I didn’t want it to be very restrained by rules. If I’m working on a movie, I want to work on a movie. I want to help. I want to be a team member and do that,” he said. He recalls that working on Star Wars for George Lucas was a great experience because the nascent ILM was a non-union shop. “Everybody did whatever they could to make it work. That collaboration is probably the best way to make something look good.”

It’s important to understand that every film is wildly different. The approach to visual effects is dynamic, and differs, depending on a laundry list of variables: directors, location availability, production designers, art departments, time and budget.

Sometimes a matte department is brought in at the beginning of the process, sometimes not. Sometimes painters are given sketches and concepts to work with, sometimes it’s just a description from the director or production designer. There’s no real “usual process” because the process always changes, is always in flux.

“In most cases,” says Ellenshaw. “I knew what the shot should be… and then as you start to work on these shots, everything kind of changes.”

One of the key elements, though, is knowing how shots fit into the movie and what they mean in context. But that context also presents one of the biggest challenges.

“The thing that you lose sight of, often,” says Ellenshaw, “is ‘what is the shot about? Why are we doing this shot?’” Ellenshaw explains that a shot needs to have a purpose and it needs to be interesting.

He uses the scene in A New Hope, where Luke and Leia swing over the cavernous shaft in the Death Star, as an example.

“If you look at that shot, there’s so much in it that makes you pay attention. One is that it just so happens in this world on the Death Star there’s these deep caverns,” says Ellenshaw. “Why? I have no idea. But it sure makes an interesting thing for Luke Skywalker to swing across with the princess.”

That interest is a vital element of visual effects in films — it’s part of the entire raison d’être.

“Every little bit of it adds to the interest and adds to the elegance of the shot,” says Ellenshaw. “It’s magic and it would be less magical without all those elements. And that’s what the job is of visual effects…[to] make this interesting.”

Naturally, when we talk about great works of science fiction like Star Wars, we talk about world building. Where do those vast, imaginative scenes come from? Who dreams up a Death Star? Where did the iconic scenes of A New Hope begin?

It all comes back to collaboration. It isn’t a case of a painter sitting in a room and dreaming up some massive landscape. It comes from the script and the production designer and the director and the art department. It’s a matter of discovering the story the film is trying to tell and working to serve that story.

“The thought process is not about contributing or being original,” says Ellenshaw, “it’s about supporting the script, the concept, the story. Its all about the story.”

A film doesn’t come together all at once. It’s a process, one which demands that those working on the film uncover the elements that make it beautiful and special and different. As Ellenshaw puts it, “You have to discover the story.”

He uses the analogy of a glass of water. The director and writer have a vision, like a half-full glass. Everyone else involved in this collaborative process tries to add some water, to bring something to the table and to fill up the glass a little bit more. As it fills, you discover the story. With enough ingenuity and collaboration and work in service to the story, you might fill the glass completely.

“And if you do,” says Ellenshaw, “you have Star Wars.”

“Never Be Afraid Of It”

One of the most important pieces of advice that Ellenshaw received early on and carried with him through forty years of work in visual effects is one of tenacity and fearlessness.

“My father would be painting on a painting and he’d be using a big brush,” says Ellenshaw. “He never used little brushes, he used a big brush and attacked it and he’d say, ‘Never be afraid of it.’”

Paintings don’t always come easily. Like most creative endeavors, they don’t cooperate and flow amicably from the brush as soon as one resolves to do the work. The blank canvas is a scary thing, but Peter Ellenshaw stressed the importance of not fearing wrong turns or mistakes.

Ellenshaw recalls that he’d say, “‘You can always put your foot through it. Do it again.’”

It’s advice that resonates far beyond the realm of painting, and the encouragement to work boldly and confidently led Harrison Ellenshaw to a career full of paintings that make up some of the most iconic scenes in popular culture.

Of the many incredible scenes he painted, two in particular stood out as the most rewarding work he’d done.

The first is from The Black Hole, when the Palomino crew enters the Cygnus control tower from the elevator.

“The shot was scripted as a dramatic reveal of very large, and hopefully, spectacular set,” says Ellenshaw. “Without the use of CGI or the ability to track on-set camera movements, we had to create the illusion of a real time push in and tilt… A lot of forethought had to go into creating such a complex shot.”

The second is one that’s embedded deeply into the minds of Star Wars fans everywhere: Han, Luke and Chewbacca at the medal ceremony at the end of A New Hope.

Unlike in The Black Hole, Ellenshaw didn’t have a script or a rough cut of the film to work with for the scenes. Instead, he had the production illustrations from Ralph McQuarrie. “So I tried to capture in my painting the feeling that Ralph had in his pre-production artwork of this scene,” says Ellenshaw.

“[I]t required, artistically, a clever way to make the environment regal and massive,” he says. “Part of the reason the shot works so well is the dramatic glow in the distant background almost obscuring Leia and the other characters. The John Williams fanfare on the soundtrack is the final perfect touch.”

Indeed, the shot is the perfect ending to a film that remains one of the most impactful works of science fiction in the history of cinema.