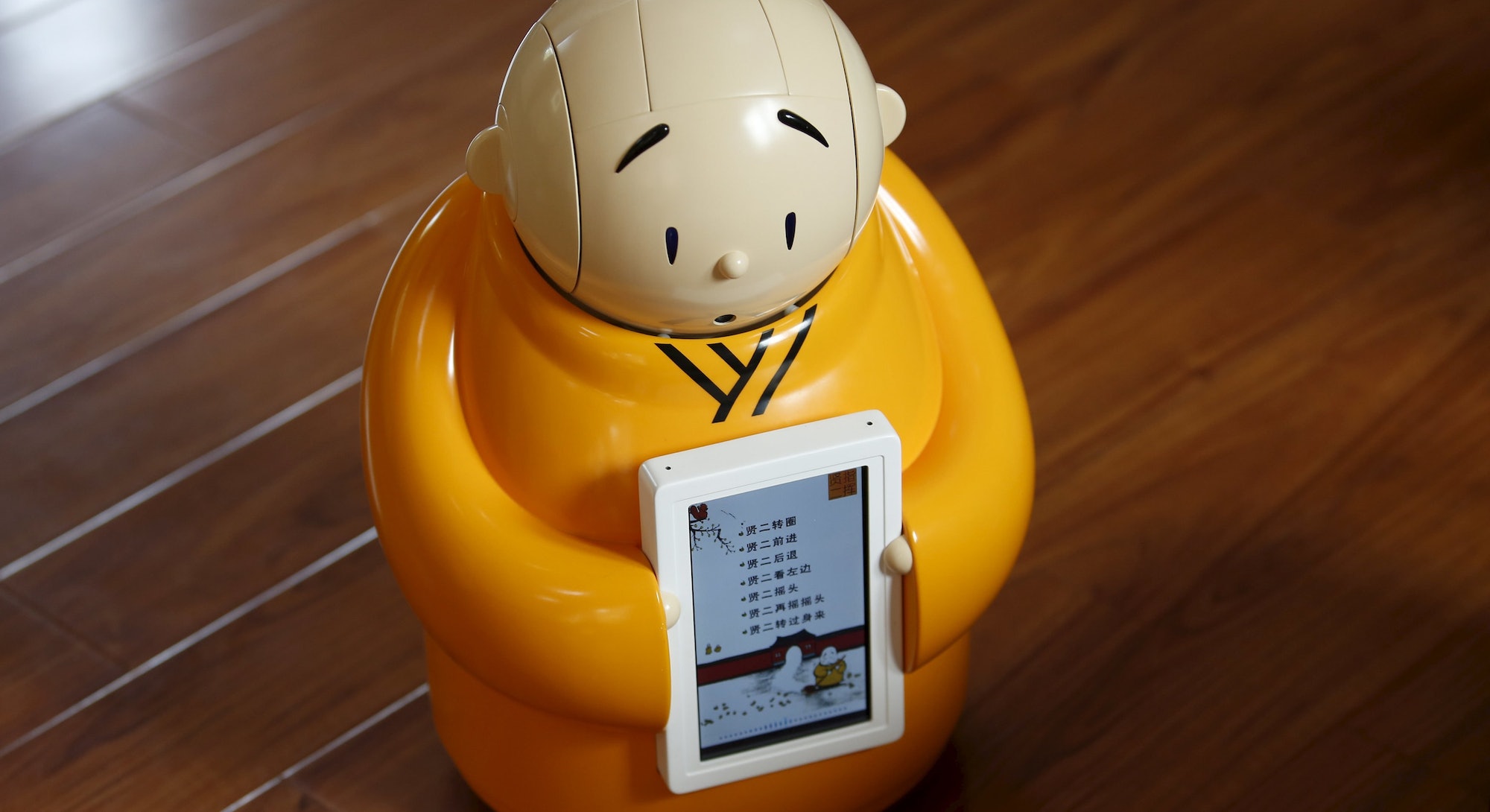 The turbulent quest for mind-expanding wisdom is a stereotypical narrative about Buddhist culture, but it has retained its allure through its emphasis on the hard work required to get there: A struggling soul in search of enlightenment makes an arduous trek to the top of a mountain, where he or she is greeted by a tranquil monk who provides clarifying counsel. A Buddhist temple in China, however, is putting a contemporary twist on that experience: instead of a human monk, a miniature robot could greet those seeking advice.

Xian’er is a two-foot-tall robot in an orange robe that dispenses bits of Buddhist wisdom at the Longquan Temple located in the mountains northwest of Beijing. Xian Fan, the director of the temple’s Comic Center, asserts that the emotionally and spiritually wise robot is geared toward “the public welfare” rather than a major profit. In recent years, the pursuit for spirituality and interest in artificial intelligence — two unrelated aspects of Chinese culture — have become more central to China’s culture. Xian’er, then, combines the two in a revolutionary way.

It’s hard to believe that such an innovative and engaging product won’t develop into a franchise, but Fan fervently upholds the altruistic nature of the robotic monk. “We’re not doing this for commerce, but just because we want to use more modern ways to spread Buddhist teachings,” Fan said. As there is currently only one Xian’er prototype, Fan’s assertion that this is not a get rich quick scheme is entirely plausible. Plus, it would maybe be the least-Buddhist thing ever if Fan had any greed-inspired ulterior motives.

Although Xian’er is capable of answering questions like “What is love?” and “Will there be another cultural revolution?”, the creative team behind Xian’er is working to expand the machine’s range of programmed responses. The robotic robed monk may not go into the sought-after intricacies of a question like “What is the meaning of life?” (his answer: “My master says the meaning of life is to help more people finally leave behind bitterness and gain happiness”) but hopefully his stockpiled responses will grow more nuanced as the capabilities of artificial intelligence advance.

As a piece of artificial intelligence, Xian’er is controlled by a set of algorithms and automated responses, which makes some people dubious that the mini monk robot could appropriately address supplicants’ individual concerns. These doubts are probably valid considering that a literally heartless robot can’t sympathize with the human experience as effectively as a real human being. Those seeking real life-altering counsel, however, should probably not depend on a piece of programmed technology for the ultimate key to happiness.

When it comes to Buddhist teachings, it seems the motive behind Xian’er favors quantity over quality: he may not give you your a-ha moment, but his mere presence increases the number of progenitors of Buddhist wisdom in the world.

Don’t worry, monks aren’t disappearing from the Earth and handing off their holy duties to programmed robots. If it’s a truly transformative religious experience you’re looking for, you’ll probably want to seek out a human monk, not an automated one that adheres to a set of codes and algorithms. If it’s a quick reminder or reality check you’re after, though, maybe it’s time to make that archetypal climb up the hill to get some face time with Xian’er.