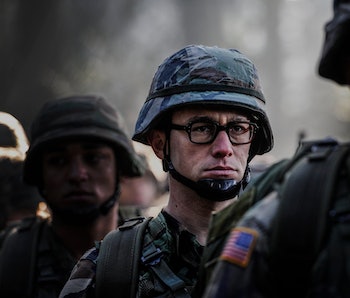 Joseph Gordon-Levitt doesn’t look much like Edward Snowden, and he certainly doesn’t sound like him — at least, not in this first trailer for Oliver Stone’s biopic of the NSA dissenter, the latest in a long line of recent and impending drone-related movies.

This behemoth, which hits theaters in the fall, isn’t going to confine itself to the events that put Snowden in the news: the covert leak of classified NSA intel to Glenn Greenwald and Laura Poitras (as captured in Citizenfour) and its aftermath. No, we’ll see the better part of Snowden’s life, and a lot of Joseph Gordon-Levitt doing a very silly, low-pitch, hyper-dramatic Snowden voice. Those of you who have seen Citizenfour will recognize that the only thing with the potential to be more annoying than Edward Snowden’s actual voice is Joseph Gordon-Levitt attempting to imitate Edward Snowden’s voice (recall, if you will, JGL’s French routine in The Walk?)

Take a listen for yourself:

There is plenty to look forward to here for fans of bloated, absurdist Hollywood film — Stone is, especially from Any Given Sunday to *Wall Street: Money Never Sleeps*, its greatest auteur. Get ready for plenty of melodramatic jargon, superimposed CGI explanatory diagrams (you gotta understand how data systems work!) and nauseating montages.

Dont miss Snowden: It’s already the most ridiculous film event of the year.