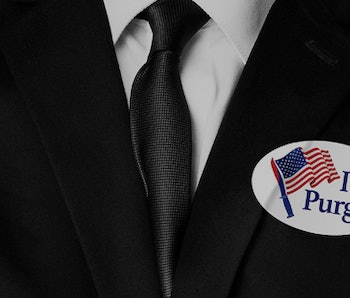 Just two installments don’t necessarily imply a pattern, but if the first two films are any indication, the Purge franchise is just getting better.

Its weapon is a sustainably ridiculous and entertaining concept: the idea that America shuts down for one night to get all of its rage and aggression out. In the first film, we saw Ethan Hawke, Lena Headey, and their vanilla all-American family locked up tight, but still being no match for a masked band of hipster home invaders. Essentially, it was a relatively uninspiring house invasion movie in the basic template of the far-superior The Strangers or You’re Next.

In the second, The Purge: Anarchy, we are stuck on the outside with an unfortunate band of individuals who must together survive the night on the streets of Los Angeles — and eventually, to combat a sociopathic gang of one-percenters who want to hunt them on a obstacle course for sport. A wider gamut of situations and villains makes for a more engrossing ride than the first film.

With Purge: Election Year, it looks like producer Jason Blum and the Purge masterminds’ palette will be expanded even further. And, of course, the film will be timely. The release of House of Cards’s 4th season was also cleverly timed, but Election Year looks to be more apropos than the beloved Netflix show — especially in capturing our current predicament, which by the day, is mounting more and more: come next year we might be living in TA (Trump’s America).

The concept of the film, first of all, revolves around a secret government conspiracy that supports a conservative presidential candidate (Homicide veteran Kyle Secor), while attempting to overturn a leftist candidate (Lost’s Elizabeth Mitchell). Her platform? Eliminate the annual Purge Night tradition. There’s an implication of classism in her rhetoric, a theme which runs through both the other Purge films and, of course, this election. There’s also hints of some deadly religious zealotry.

Sarge from The Purge: Anarchy (Frank Grillo) is head of security for Mitchell’s campaign, but after Secor’s thugs attempt to murder her, they are forced onto the streets to fend for themselves.

Like House of Cards, and unlike the 2016 election, the evil in Election Year originates from a pre-existing government tradition — and the potential for it to grow more insidious — as opposed to a reversal or overthrowing.

What The Purge: Election Year suggests implicitly, is that real life is finally catching up to the premonition of franchise creator James DeMonaco. He claimed recently to EW that his script was written before the election began, though he admits that he might have “subconsciously” had an idea about who the players would be (that seems very likely in Hillary’s case). How does he hope the audience will interpret the movie?

I’d like to the audience to play with it and see who they feel is representative of the actual candidates in the real world, without me saying who’s who. I think the audience will have a lot of fun saying, “Oh, that reminds me of something Donald said!”

Marking the first time that a non-family member or friend has ever called Trump “Donald,” DeMonaco’s statement joins the movie’s confusing and effective ad campaign, featuring previews which could blend in with real campaign ads. The images of wholesome families smilingly canvassing in support of killing people is effective, and almost exactly the kind of thing one sees regularly in footage of Trump or Cruz on the campaign trail.

In a potential world where all immigrants and people of the Muslim faith might be treated as enemies of the State in just a few months, the notion that lethal, nihilistic brutality could become (publicly) government sanctioned seems almost inevitable.

Be forewarned: Trump’s America won’t come at the top of next year. It will arrive in theaters on July 1st.