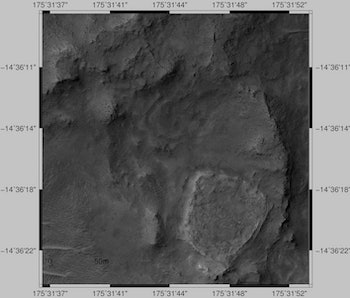 For a little over 11 years, a British spacecraft named Beagle 2 sat on the surface of Mars without a peep.

The European Space Agency launched the lander in December 2003 as part of the Mars Express Mission — its first ever attempted research expedition to study the red planet. Unfortunately, the ESA lost contact with the lander just as it was supposed to touch down on the surface of the red planet. By February 2004, the ESA had to declare the Beagle 2 lost to space after repeated failed attempts to communicate with the lander. But then, in January 2015, NASA’s Mars Reconnaissance Orbiter managed to photograph Beagle 2 using its HiRISE camera.

Now, scientists from the University College London have used a new imaging technique to show off Beagle 2 and other parts of the Martian surface in never-before-seen detail — at a resolution 400 percent greater than what was possible before.

Here’s what scientists could see before:

But thanks to something called Super-Resolution Restoration, or SRR, they have stacked and matched pictures of the same area taken from different angles by the HiRISE camera. In a new paper published in the journal Planetary and Space Science, the UCL team explains its methods.

Among the other landmarks the team can now see with beefed-up resolution: lakebeds discovered and photographed by the Mars Curiosity rover, tracks left behind by the old Spirit rover that went out of commission in 2010, and impressive rocks located in the “Home Plate” region of the planet.

More importantly, however, is that the new findings show the potential for the SRR technique to allow us to basically explore Mars from a bird’s eye view.

“We now have the equivalent of drone-eye vision anywhere on the surface of Mars where there are enough clear repeat pictures,” said UCL scientist and study co-author Jan-Peter Muller in a news release. “It allows us to see objects in much sharper focus from orbit than ever before and the picture quality is comparable to that obtained from landers.”

In short, SRR is allowing us to image the planet in ways only rovers and landers have been able to before. Orbiters are getting better and better, but their capabilities are still limited — especially if there are atmospheric and climatic issues.

Current orbiters have cameras that can take images at about a 10-inch resolution. Impressive, but obviously researchers want to do better. SRR essentially takes those images and compiles them together in such a way to achieve resolution as small as two inches.

The implications mean we might be able to ramp up study of the Martian surface by leaning more on orbiters — which are easier and less expensive to build and launch — and instead using rovers and landers for more geological analysis. That’s exactly the idea behind the Mars 2020 rover and the InSight Lander: to conduct less imaging work and more scientific study directly of the surface and the composition of the planet.

Inadvertently, the study helps lend more support to NASA’s desire to build another orbiter to launch to Mars sometime around 2022.

The launch of the Odyssey orbiter helped revive the agency’s Mars program. More investment in orbiter spacecraft would only serve to ramp up research that would inevitably help us in getting human boots on the ground.

Oh, and as for why the Beagle 2 went quiet? After reviewing the images, the popular theory remains that one of the Beagle 2’s solar panels didn’t open fully, which would have helped enable radio communication with Earth. At least we can see the lander in high resolution, even if it can’t talk back.