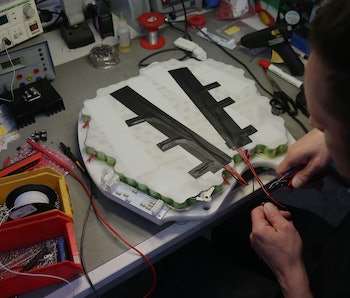 A recent study published in the American Chemical Society has the scientific chattering class using their beakers to toast a group of researchers at University of California Irvine, who may have constructed a battery system capable of a staggering charging and discharging 200,000 times without exhibiting any significant drain or corrosion. It’s an astonishing discovery made in an astonishing way: by accident. The battery was created when Mya Le Thai attempted to replace a liquid electrolyte she’d been using with a gel in a solid state capacitor and fired the thing up. It charged and discharged longer than anyone could have reasonably — or even unreasonably — expected. Using gold nanowires coated in manganese oxide rather than the traditional lithium, the battery was vastly more resilient than anything currently on the market, losing only about five percent of its charge.

The technology is not ready for commercial implementation because the people who created it still aren’t exactly sure how it works. So, what’s next for this extraordinary accident? Inverse spoke to one of the study’s authors, Reginald Penner, who is Chairman and Chancellor’s Professor of Chemistry at the University of California, Irvine.

You stated right after the study came out that you weren’t sure how or why this reaction was happening — have you come up with any new theories?

We have a hypothesis, and that’s about as far as it goes. What we think is that this gel very slowly permeates into manganese oxide — a very porous material, about 80 percent porous— so what we see in our data is that the capacity of this thing keeps going up and up and up, for weeks. That suggests maybe the gel is very slowly permeating into the manganese oxide and, as that happens, the gel could be plasticizing. The manganese oxide is very brittle; it normally fractures and falls off the gold nanowire. But that doesn’t happen with the gel. So the gel is doing something more than just holding this thing together; it’s changing the physical properties of the manganese oxide somehow, making it softer and more fracture-resistant.

So this battery has a potentially ‘infinite’ life, but it’s not ready to be implemented on a practical, commercial scale. What’s the disconnect there, and what’s the next step for this?

We’re not going to engineer this thing into a battery, because we’re scientists. We’re going to study this process more. We’re interested in understanding what happens to the mechanical properties of the manganese oxide shell, with and without the gel electrolyte. We’re going to take an instrument called a nanoindenter and poke the shell to test its hardness; we’re expecting to see the manganese oxide shell get softer in the presence of the gel and see that it’s much harder in a liquid electrolyte after it’s been cycling for a while. That would help us confirm that the mechanical properties are changing. We also want to study different gels and different metal oxides to see if there’s one that does the job better than the one we’re using so far, and if it applies to other materials besides manganese oxide.

Is the cost of the material — all the gold — an obstacle?

Nickel would be easy to substitute for gold, and a lot cheaper of course. It ought to produce the same effect.

Any guesses as to how long before we see this implemented in the real world?

This is just the first paper. We need another 20 papers, another 100 papers, on this process before we’re really going to understand it and companies are going to be willing to take a chance on it.

We hope people will read our paper and start to work on this.