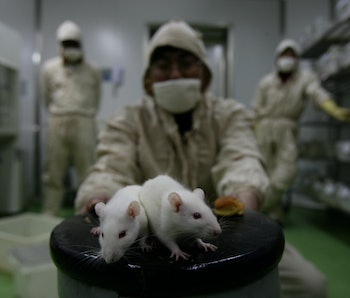 Drugs and addictive personalities are never a good combination. Unfortunately, it’s not always easy to tell who’s likely to wind up desperate for a fix. A new study on cocaine-addicted rats, however, could make it a lot easier to predict vulnerability to drug addiction.

Researchers pinpoint in a new study in the journal Proceedings of the National Academy of Sciences that the genetic differences in addiction-prone rats might someday make it easier to screen for likely drug abusers before they become addicts in the first place.

“There’s a number of essays that could be created to look at these different molecules to identify if somebody has a history of addiction in their family,” Shelly B. Flagel, Ph.D., the study’s lead author, tells Inverse, explaining that the proteins encoded by the genes her team looked at could reliably be measured in blood or saliva.

“If they have certain low versus high levels of one of these molecules, then they can be a candidate for treatment to prevent addiction in the first place. Or, if we know that they’re an addict, to prevent relapse.”

Flagel and her team, made up of researchers from the University of Michigan, Ann Arbor and the University of Alabama at Birmingham, based their work on previous research on rats showing that the genes for two molecules — fibroblast growth factor and dopamine D2 receptor — were involved in the response to cocaine and other stimulants.

To study the differences in the way these genes were expressed, they compared two rat lines that were selectively bred to be “high responders” (which most closely resembled human addicts, in terms of temperament and impulsivity) or low responders to stimulant drugs. Crucially, they were able to look at the differences in these animals before addiction set in, giving the researchers a glimpse of what factors might make up a predisposition to drug abuse — essentially what we call an “addictive personality.”

“In human studies, we’re looking at these molecules after we know this person is an addict,” Flagel said. “That’s one benefit of this study — that we were able to look at essentially genetically similar animals, and say, this is what their brains look like before they’ve been exposed to cocaine, and then this is what they look like after they’ve gone through this prolonged self-administration paradigm and develop or exhibit these addiction-like behaviors.”

They found that addiction-prone rats had higher than normal levels of fibroblast growth factor, which stayed high even after rats were exposed to cocaine. In contrast, these rats had lower levels of the dopamine D2 receptor to begin with, but these differences disappeared once they became addicted to cocaine. Flagel admits these results are somewhat “counterintuitive” given what human drug studies have taught us about dopamine and cocaine — that is, that addiction-prone humans tend to have low D2 levels in general — but she chalks up the discrepancies to the fact that human cocaine studies mostly focus on people who are already addicts.

More studies will be needed to figure out how different levels of fibroblast growth factor and the dopamine D2 receptor make the rats more susceptible to cocaine addiction, but Flagel is optimistic that her study has put the addiction treatment field on the right track.

“It’s just providing further evidence that this is clearly a key molecule,” Flagel said. “In terms of how to target it, or what levels it’s at in humans is a different story, but it’s definitely a key molecule to keep an eye on.”