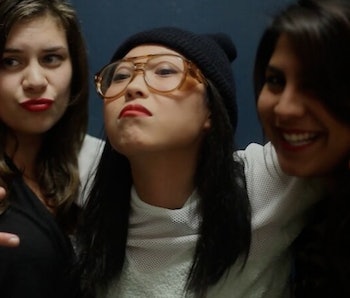 “Name one Asian-American rapper,” director Salima Koroma asks in her latest documentary Bad Rap. As expected, not a single one of the music critics and A&R reps she interviews can come up with a single name. Koroma then broadens the question: “Name one Asian-American pop artist.” After a lot of “um,” it’s obvious that even to today’s most tuned-in cultural tastemakers, this line of questioning remains too great a challenge.

Intersperced with fresh battle rhymes and live performances, Bad Rap, which premiered at the Tribeca Film Festival, follows the unsung struggle of four Asian-American entertainers trying to break into the hip hop industry, which often views them as outsiders. Inverse chatted with director Korma and rappers Dumbfoundead, Awkwafina, and Rekstizzy about overcoming racial stereotypes, viral hits, cultural appropriation, and their effect on the latest generation of Asian-American rappers.

In Bad Rap, you make clear that visibility for Asian-American rappers is a huge challenge. One of the music critics in the film explains that it’s about “putting in your time and paying your dues on tour.” Do you agree with that statement?

Awkwafina: I think on the surface, that’s very easy to say. JP has said this in a previous interview, that this music can be seen as “why not me?” It’s not, because that’s a very prejudicial way of looking at our situation, and also at a very shallow level - saying no Asian-American rappers are killing it, so basically the world hates Asian-American rappers, and they’re not able to do it. The truth is, if you look closer, we have our own issues. Specifically for me, my songs have a very sardonic aspect. So in that way it’s hard for my songs to become mainstream, but they exist on a YouTube level. Dumbfoundead broke into recording songs after his illustrious battle rap career. So that’s his issue: he needs to find a way to make his songs hit. For Reckstizzy, he’s relatively new and has three albums out, and he’s still trying to work on that. So you have to look at each artist individually.

Dumbfoundead: One thing that was troubling is that when she [the director] asked, “Name one Asian-American rapper,” they couldn’t name one except Keith Ape, who’s not Asian-American. If anyone should be able to name one, it’s them. I mean, if you’re a tastemaker. It means finding rappers not just on the radar but under the radar. Ebro really liked Awkwafina’s “My Vag” song, right? He should’ve known about that. It also went viral, and it’s an old song.

A: The thing about Keith Ape that proves is that you don’t really have to pay your dues. And it also shows something that I think is really hard to talk about and that this film touches on, which is that it’s a hype-based industry. It’s completely random who is chosen to become that new hype. So you can work every day of your life for the 20 years and still not reach the level that Keith Ape had in three weeks. We can sit here and complain all day that we didn’t have that hit. But maybe we did, and it just never got found.

You talk about breaking down stereotypes: the fact that you can’t appropriate what’s considered classic rap culture without seeming inauthentic.

Reckstizzy: If you see any of our videos, we could all put out the same song, same video, as a non-Asian. But then the comments will be like look at him he’s trying to go in, he’s trying to be gangster, he’s trying, whatever. It’s like why are we trying? They already have this preconceived notion of what Asians are supposed to be like.

D: There are even Asian-American gangster rappers who are gangsters, you know? But when people see them, they think they’re playing this role. They can’t even imagine what an Asian gangster looks like. Or even times when we just rap, we’re not even gangster with our lyrics. But they automatically think we’re trying to be gangster because we’re attaching ourselves to the hip hop culture.

Then why do you think it works for someone like Miley Cyrus?

A: It worked for Miley Cyrus because she has agents and booking agents, and all this management that is connected to every single high-profile person. So if Miley Cyrus gets a song with Juicy J, she’s not appropriating.

D: She gets a pass. The thing is, a lot of the people involved in the culture allow that too, as much as we want to hate on culture appropriation. Like T.I.’s riding with Iggy Azalea. And when money’s involved…

A: It becomes stealing when you don’t acknowledge the fact that it is black music. You don’t have to be one of those people who’s well-versed in Cork and Molly Molly. It’s something we’re trying to partake in. We’re not trying to steal it. It becomes stealing when you’re a guy who lives in Singapore who’s never been to the United States, who’s dropping the N-word literally, who’s wearing gold chains, and who can’t even pronounce his rap name in English. I think that’s when it becomes an issue.

D: Well, I don’t completely agree with that either. You don’t what their relationship with hip hop could be. There could be cultural misunderstandings there.

Salima Koroma: I think you have to define what cultural appropriation means. For me, when I think of cultural appropriation, I think of something that a certain subsect, whether it be gay men, black people, whatever it is, has been doing but that hasn’t been recognized. But say, when a white person does it, then it’s recognized for being awesome. You know, like when Kim Kardashian is recognized for wearing boxer braids. They’re not corn rows, which black woman have been wearing since the beginning of time. For me, that’s where it’s destructive because it totally diminishes what this culture has been doing. If you look at Awkwafina’s or Dumb’s music, they’re not trying to be this thing. They’re doing what they know.

A: Also relationship of cultural appropriation is of a dominant majority stealing from a minority. So you can’t really use that on a minority. I don’t think that we will do it in such a destructive way as someone like Kim K or Iggy, or someone like that, you know?

D: To be honest, the reason I think we’ve seen any success for our kind of rap is that we don’t sound super slanged out. Honestly, there’s a little bit of dorkiness to it. I remember when I was coming up, all the other Asian rappers were trying to be super hard and gangster about it. I was just a skateboarder kid from LA. So I felt like that was a transition where things started changing a little bit.

In the film, Dumbfounded brings up popular culture’s associations with Asian Americans as limited to Jet Li and Jackie Chan types. Do you guys think that you’re helping to redefine Asian-American identity through your music?

D: Yeah, I think so. I’m not going to lie. When I saw the film and looked at myself three years ago, I definitely felt like there was a lot of compensating we do with our masculinity. A lot of these Asian cats I look up to, I can tell that they’re over the top with their masculinity because of the emasculating we’ve experienced in the past. I know that. I feel that rage in me when I’m on stage - I want to be like, “I have the biggest dick here!” So that’s something that I had to look at in myself, and that’s part of the growth I’m trying to have with my journey as an Asian man in this country.

R: As an artist, I wanted to be more like David Bowie. I have a couple videos where I’m hypermasculine, and then in my last video I’m wearing eyeliner and have very glamorous motions.

Since you finished making the film, have you received positive reactions from the up-and-coming generation of Asian-Americans? Do they see you as role models?

A: It was crazy to see how many awkward girls there are like me when I was 16 that have the same questions of “What am I going to do for the rest of my life? Can I be happy?” I think the younger generation have the world. We’re the last generation that grew up without computers and stuff like that. We’re the last very traditional generation. Chinese people, Korean people that are now first generation - their parents are completely Americanized.

D: I’ve been doing college shows with young people since I was 19 years old. I just turned 30, and just did a college show in the last week. I could tell that we still have a long way to go because there’s still not that kid who’s going to step up to me and try to battle me. I can overpower everyone vocally. When I was young I was the motherfucka trying to battle you, trying to rap all the time. I want to see that! I want to see kids coming up to me and trying to challenge me! I wanna see that aggressive confidence. Maybe I’m generalizing, but it’s just not there yet.

It’s been two years since you started filming. So what are you up to now?

D: I took a little hiatus because I wasn’t as creatively inspired, but now I’ve got a music video in the works, and I’m dabbling in acting. I have some TV stuff coming up.

A: I’m in Neighbors 2. I’m also one of the leads in another movie called Dude that’s coming out at the end of this year.