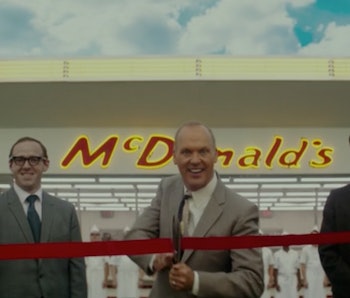 The film follows Ray Kroc (Michael Keaton), a salesman who goes into business with Mac (John Carroll Lynch) and Dick McDonald (Nick Offerman), then wrests control of their company and launches the Golden Arches Empire. His capitalist battle cry, “Franchise, franchise, franchise!” still rings from coast to coast in an America that became stuffed to the gills with fast food chain restaurants. The trailer starts in pretty dramatic fashion — fitting for a film from John Lee Hancock, the director behind Saving Mr. Banks and The Blind Side.

“I know what you’re thinking,” says Kroc. “How the heck does a 52 year-old, over-the-hill milkshake machine salesman build a fast-food empire with 1600 restaurants and an annual revenue of $700 million? One word: Persistence.”

It���s more than just persistence, though. There are shady business deals, broken contracts, and greedy practices at work as Kroc builds the fast-food empire that was, especially in the 1950s, revolutionary” in its ultra-quick cuisine.

The biopic explores McDonald’s seedy roots and its rise to become something quintessentially American, for better or worse. Keaton’s Kroc pretty much sums it up with, “Business is war: it’s dog eat dog, rat eat rat. I want to win.”

The Founder is slated for theatrical release on August 5th.